Downstream of Project Hope’s Carter Hall spring, students from Ms. Robin Coutts lower school science class at Powhatan School released trout fry they had raised from eggs into Spout Run. For the last several years, the school has participated in Trout Unlimited’s “Trout in the Classroom” program as part of an environmental science curriculum focused on habitat and water quality.

Bordered by Spout Run and Page Brook, Powhatan is ideally situated in the heart of the Spout Run watershed. In 2011, the school received a donation of 46.8 acres along Spout Run (Crocker Conservancy) which will be in perpetual easement for education and recreation. This will allow the school to expand is focus on environmental science and nature study.

Releasing trout back into the wild is a small but symbolic event culminating three years of restoration work in this stretch of the stream by Trout Unlimited and the C Spout Run partnership. Work has included extensive stream bank restoration to reduce sedimentation and numerous tree plantings by volunteers to restore habitat and tree cover — all to help protect and cool the waters. Hopefully, these trout fingerlings will now find suitable conditions to grow and reproduce.

Kudos to Ms. Coutts and the students of Powhatan!

Why the Zoning Rewrite Matters—Part #1 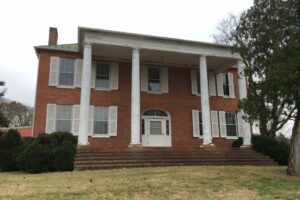 Environmental Justice and a Burning Bridge Across the Potomac (JMU 2022)

Shepherdstown, WV: It used to be part of Virginia before[...]

“There are two things that interest me.  The relationship of[...]