Over the years they slowly disappeared.  And then they were gone.  I last saw a Loggerhead Shrike in Swoope in 2014.  The Loggerhead Shrike is a “common bird” whose population is in “steep decline”.  In this post, I will describe the bird, chronicle its population, report efforts to bring the bird back and relate what you can do to help.

The Loggerhead Shrike, Lanius ludovicianus, is a songbird with a raptor beak.  It is known as the “Butcher Bird” because of its carnivorous diet and habit of impaling its prey on thorns. 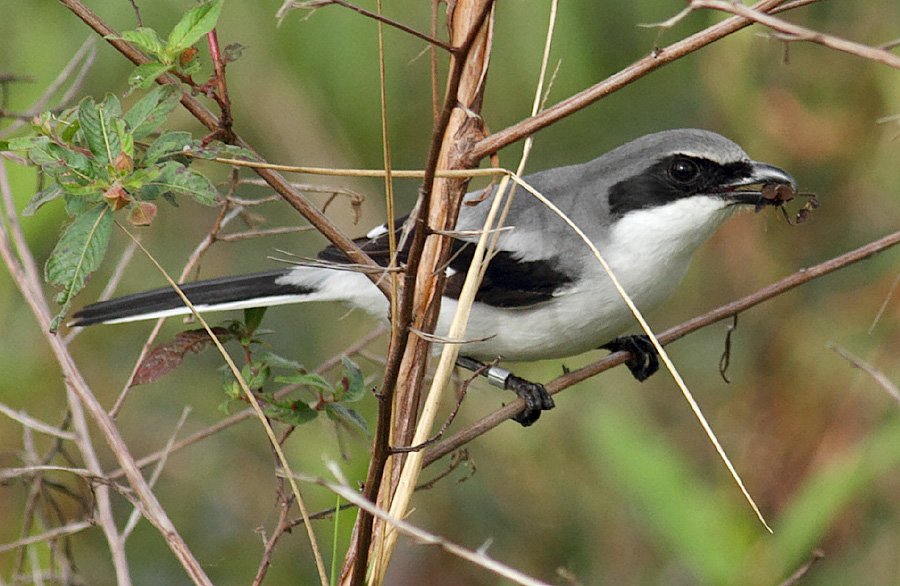 We used to see them on a regular basis.  There was a nesting pair in the thorn bushes of an old hedgerow in the pasture behind the house.   I lament that we may have had the last nesting pair in Augusta County on the farm where I live and work.

In 2006, the late Yulee Larner, “Bird Lady” of Augusta County, wrote about birding in Swoope,

“This is the only place in Augusta County where we find nesting Bobolinks and the most consistent location for year-round records of the endangered Loggerhead Shrike”, News Leader, 3/11/2006

I used to see them every year somewhere in Augusta County, Virginia in the 80’s.  We saw them in the backyard when we lived on Old Greenville Road in Mint Spring.  I remember showing them to my daughter when she was young.  She stood on a chair behind the sliding glass doors of the living room with my binoculars – and saw them.

It was a rare bird even then, and to be honest, not many people even know about them.  They are about the same size and color as a Mockingbird.  I’m a birder.  And even in birding circles if you claim to have seen a Loggerhead Shrike they tilt their head and squint one eye saying, “Oh, you probably just saw a Mockingbird.”

Loggerhead Shrike Behavior and Diet Much Different than the Northern Mockingbird 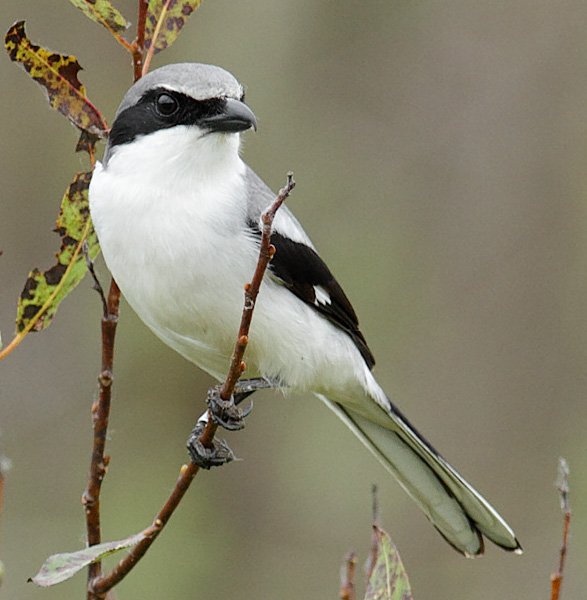 The Shrike has an unmistakable black mask and does not have the behavior or the song of the Mockingbird.  Shrikes are carnivorous and stun their prey with their beak.  The Butcher Bird impales their prey such as small birds, small mammals, reptiles and large insects on thorns and barbed wire.  They are rather hard to detect and their song is not really a song at all but more of a shriek. 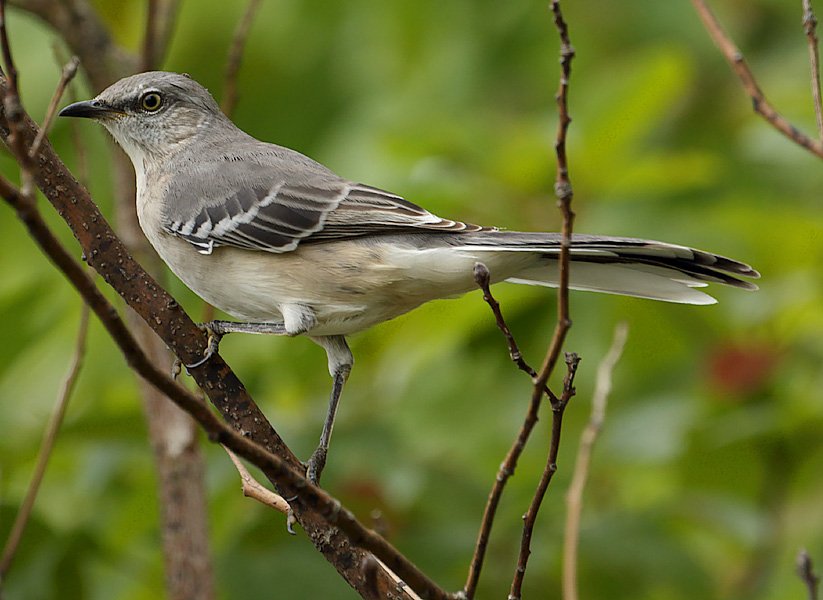 Northern Mockingbird photo by © Marshall Faintich.  Similar in size and color to the Shrike but lacks the black mask and black wing patch.

Mockingbirds, on the other hand, are not hard to detect at all.  They like to sit on a high perch such as the top of a pole or on the top branch of a tall tree and sing their hearts out with an infinite number of clear and vibrant songs.  They often sing all day and into the night.

This Shrike Species is “Threatened” or “Endangered” in Fourteen States

This songbird, capable of killing vertebrate prey by severing its vertebre is listed as “endangered” in Canada and either “threatened” or “endangered” in fourteen states including four states in the Chesapeake Bay watershed: Virginia, Maryland, Pennsylvania, and New York.

The Loggerhead Shrike is the only Shrike species endemic to North America.  Its population has declined by 76% between 1966 and 2015 according to the North American Breeding Bird Survey.  Its population is expected to be cut in half within 24 years, according to scientists at Partners in Flight.   Globally, it’s a “common bird” because its population is stable in the Southern parts of its range as in Texas, Florida, and Georgia.  But, in it’s transitional or migratory range as in Virginia it is on the brink of extirpation.

“There are only about a hundred individual Loggerhead Shrikes left in Virginia and only a few known breeding pairs”, states Dr. Amy Johnson, Director of Virginia Working Landscapes, a program of the Smithsonian Conservation Biology Institute. 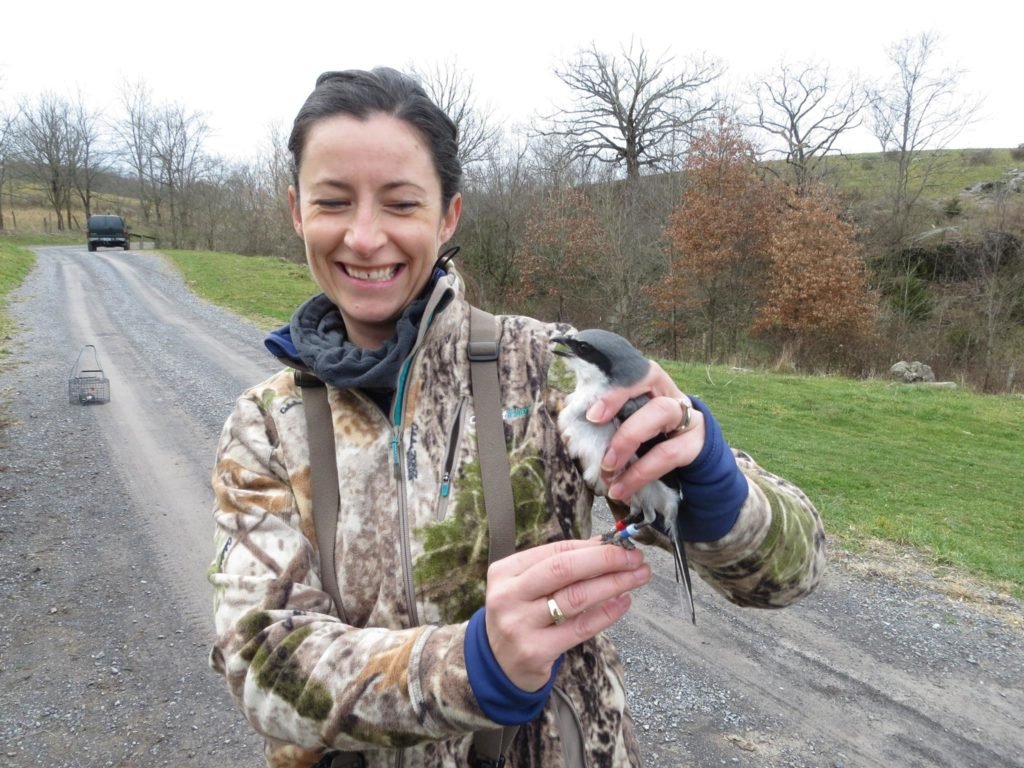 Decline Coincides with the Introduction and Increased Use of Chemical Pesticides

“Loggerhead Shrikes have been listed as endangered, threatened, or of special concern in several states and Canada, and have been proposed for federal listing (the subspecies that nests on San Clemente Island, California, is listed as endangered). The species’ decline coincides with the introduction and increased use of chemical pesticides between the 1940s and the 1970s, and may result in part from the birds’ ingestion of pesticide-laced prey from treated fields.”

No one can really pinpoint why the bird’s population in the migratory zone has declined so rapidly. Scientists speculate that chemical pesticide use, loss of habitat, and climate change are partly to blame.

Bringing Back the Bird

Biologists from the Virginia Smithsonian Conservation Biology Institute have partnered with Wildlife Preservation Canada and the Toronto Zoo to support an ongoing reintroduction program. Using birds acquired from the Toronto Zoo, they are breeding Loggerhead Shrikes at the Smithsonian Zoo’s facilities in Front Royal, Virginia and transporting captive-bred juveniles into Canada to be released each year with juveniles from the Ontario program. Their hope is that this will enhance efforts to repopulate this migratory sub-species to its former range while enabling biologists to learn valuable information about their reproductive biology. 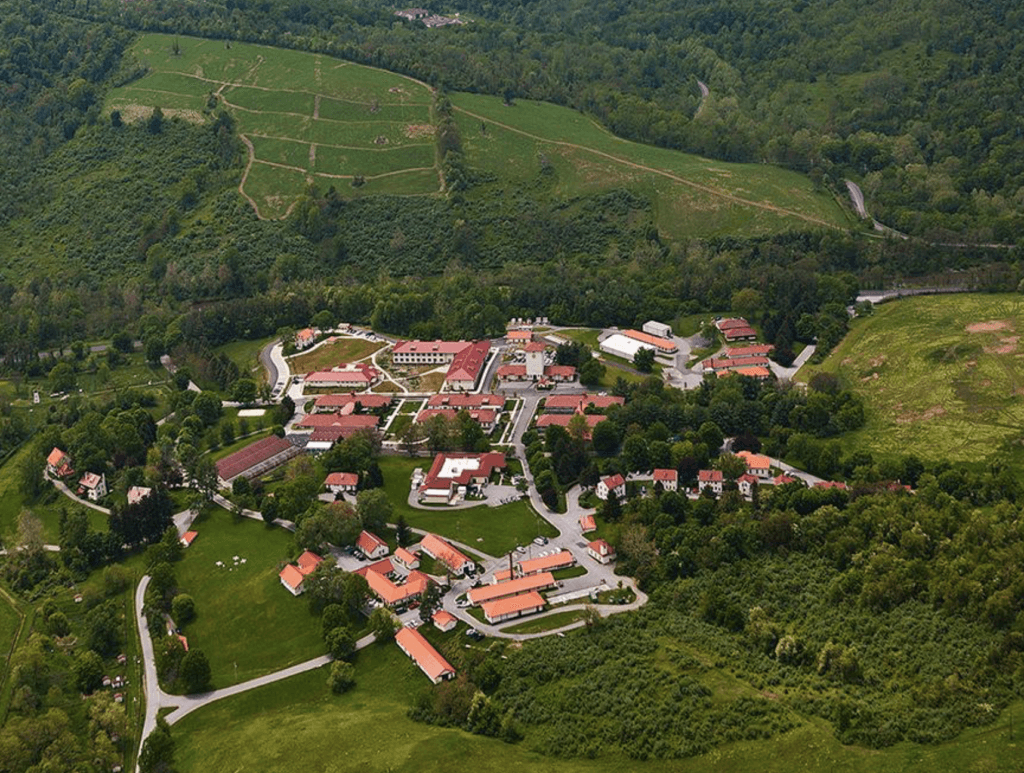 View of the Smithsonian Institute’s facilities in Front Royal, Virginia.

The Plan is Working!

Last year, one bird, raised in captivity and banded in Canada was seen in Augusta County, Virginia.  It was captured on video by citizen scientist, Jean Shutt.

These are the bacteria concentration results for the water samples[...]

Happy Earth Day! Today the pastures of Swoope are a[...]

Earth awakens from the cold during the month of March[...]