As we drove into the pasture with a half-ton bale of hay for the cows I saw a flock of perhaps thirty small birds fly in a tight pattern away from us. 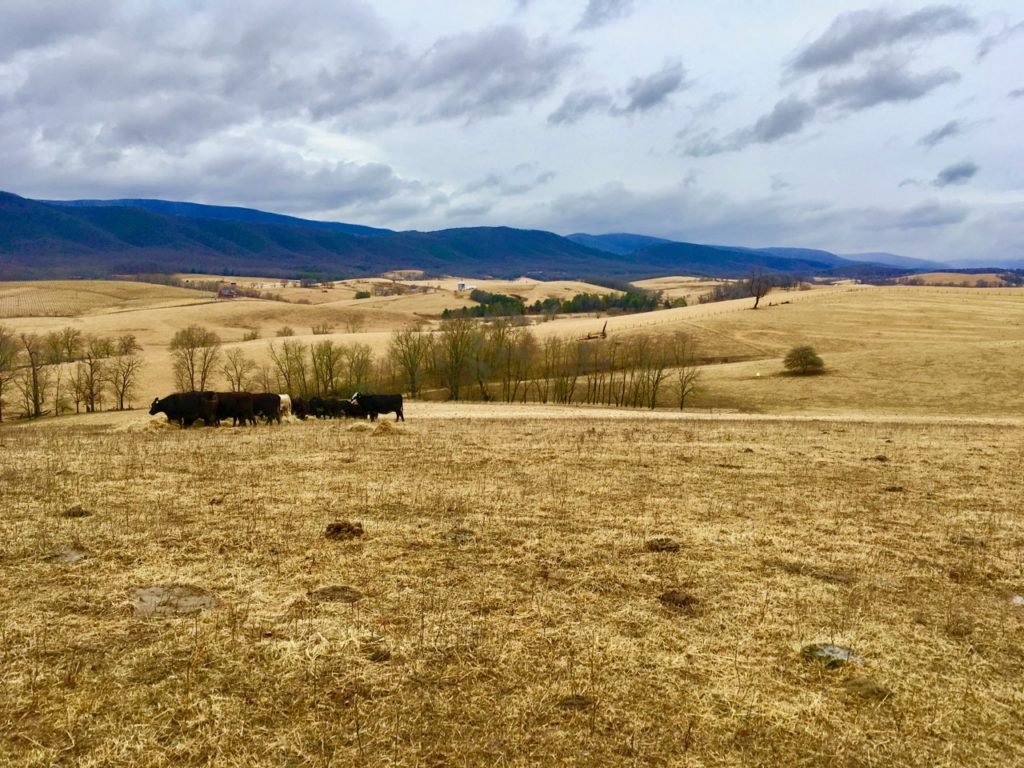 The vast grasslands of Swoope, VA. The Allegheny Mountains flank our Valley to the West.  This is winter habitat for Horned Larks.

The flying flock turned one way, then another, their white bellies exposed as they turned.  This is a tell-tale sign of Horned Larks.  They landed on the cold, brown, dormant, pasture about thirty yards away.  Once they landed, I could not see them with my naked eye because they blend in so well with the vegetation. 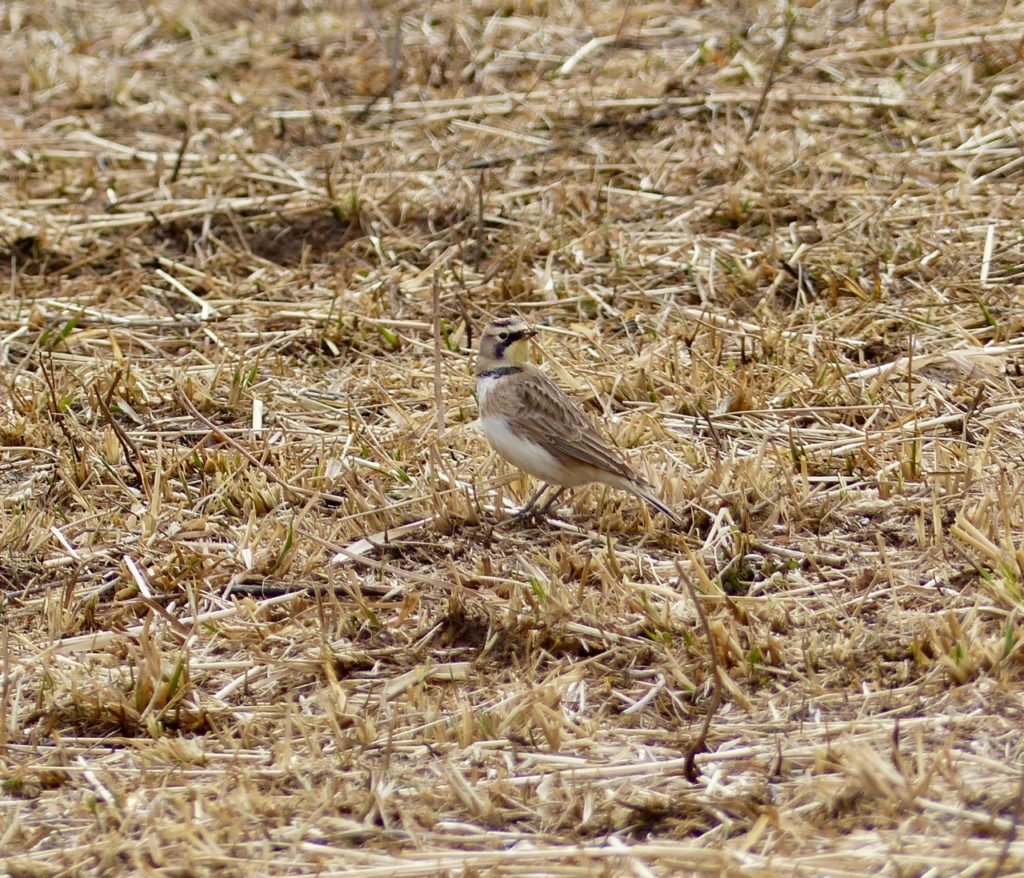 I don’t think most people know what the birds are because they can’t get close enough to identify them. They’re just little birds flitting away.  Put a pair of binoculars on them and you will see one of the most beautiful birds in North America. 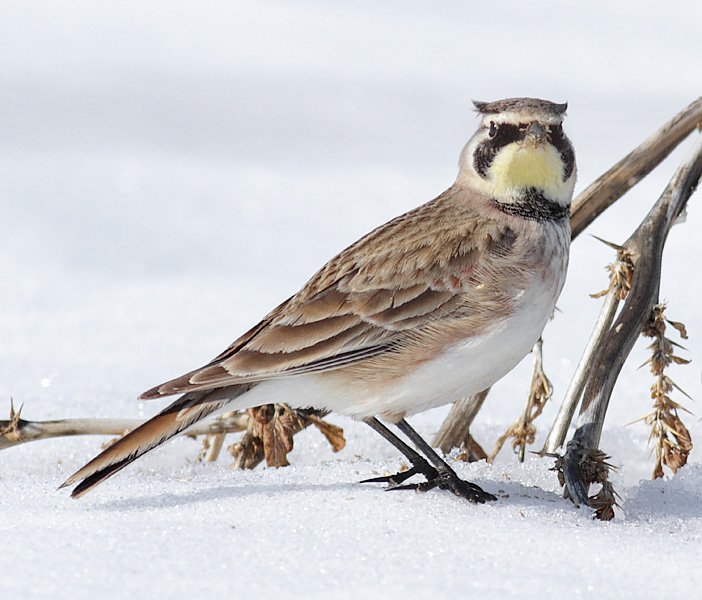 These birds are the only true lark in North America.  Larks are characterized by a long hind claw.  They have small tufts of feathers on their head that makes them look like they have “horns.”

Horned Larks are grassland birds, 7 to 8 inches long, brownish on top and whitish underneath.  They have a white eye-stripe, black mustache, yellow chin, and black bib.  They prefer very short vegetation or bare ground and walk or run along the ground in search of seeds and insects. 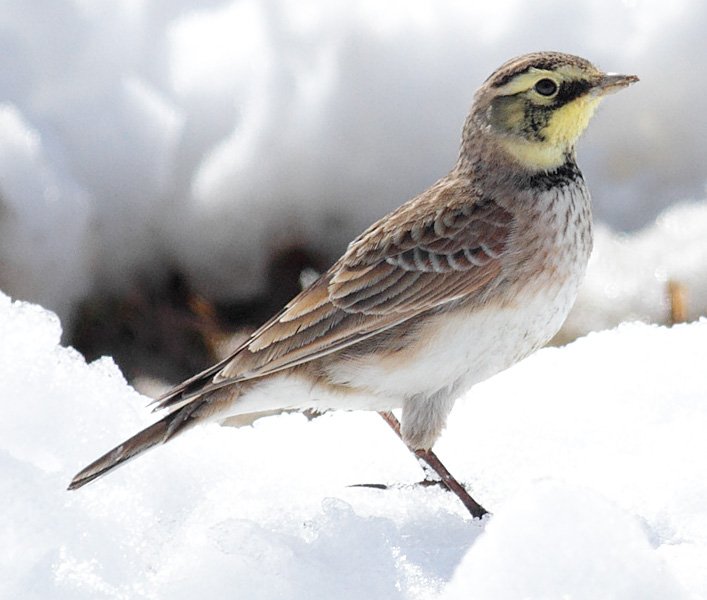 The vast grasslands of Swoope, Virginia, are in America’s legendary Shenandoah Valley.  We see Horned Larks every day during the winter in fields where we feed the cows.  In these fields the vegetation is short but not bare.  I don’t see them in the summer on the farm because the grasses are too high for them.

Sadly, this bird is a “common bird in steep decline”.  Horned Lark populations have plummetted more than 70% since 1970, according to Partners in Flight, a continental conservation organization.  The reasons for the decline are all anthropogenic (human-induced) and include loss of habitat, urbanization, and pesticides.

“Horned lark populations have steadily declined as dry, open uplands have reverted to forests or have been destroyed by development. As with other ground-nesting birds, high populations of predators, such as raccoons, skunks, and housecats, have also contributed to the decline of this species,” states a report from the Connecticut Department of Energy and Environmental Protection that lists the bird as “state-endangered.”

On the bright side, scientists report that the Horned Lark is a “super avoider” of collisions with towers and buildings.

As you can see from the distribution map below, they are year-round residents in most of the continental US. Their breeding range extends into Canada and above the Arctic Circle.

How Can You help?

There are several ways we can help.  We can support Farm Bill legislation that conserves grassland.  Support local ordinances that prevent the conversion of agricultural land to non-ag uses.  Keep cats indoors, and support programs that humanly trap, neuter, and shelter feral cats.

The post Horned Lark – Special Species of Swoope appeared first on Getting More on the Ground.