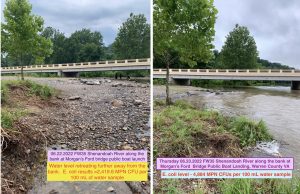 On Wednesday June 22, 2022 some areas in the region experienced rain storms where 1-2 inches of rain fell. We were able to collect water samples at sites on Wednesday before the storm. We went out again on Thursday, June 23, 2022, after the storm to collect water samples at some of the sites that we did the previous day to illustrate the effect the rain had on E. coli levels.

As reference, the FOSR uses the Virginia water-quality standard prior to October 2019 which was a single sample threshold of 235 E. coli colony-forming units per 100 mL of water sample for primary recreational use. Meaning that if a single freshwater grab sample had E. coli levels that exceed 235 CFU per 100mL of water sample then the water was considered unsafe for primary recreational use.

Environmental Justice and a Burning Bridge Across the Potomac (JMU 2020)

Shepherdstown, WV: It used to be part of Virginia before[...]

Thanks to all the dedicated students and adults for your[...] 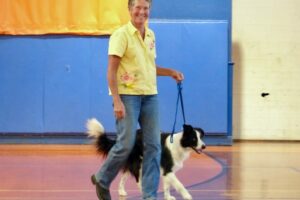 Our Border Collie, Valentino, is a therapy dog. He’s also[...]