A textbook example of environmental racism has unfolded in Union Hill, Virginia. When Dominion Energy was looking for a site for its Buckingham compressor station the Federal Energy Regulatory Commission (FERC) and Virginia’s Air Pollution Control Board (APCB) chose the predominately African American community of Union Hill—a community of descendants of freed African slaves. 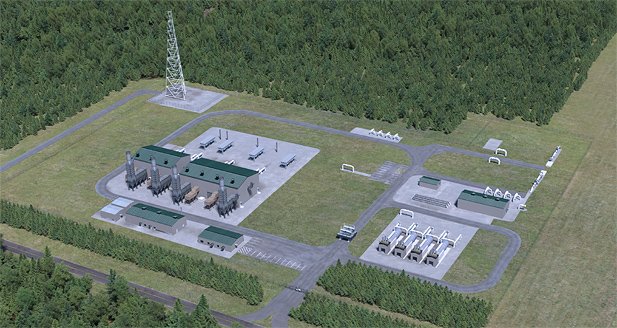 Artist’s rendering of the Buckingham compressor station. Photo from the Dominion Energy website.

The Buckingham compressor station is part of the planned, now beleaguered Atlantic Coast Pipeline, a 605-mile, 42-inch, high-pressure, fracked-gas pipeline. The compressor station is needed to compress the gas for efficient movement through the line. The 54,000-horsepower, gas-fired station will run every hour—every single day. According to FERC’s own environmental impact statement, this compressor station will significantly increase air pollution. Annual nitrogen oxide pollution will increase by 120 percent. Daily fine particle emissions will increase by 69 percent. The station will also emit known carcinogens into the community. The APCB and Virginia’s Department of Environmental Quality (DEQ) argues that this increase is still below the states’ air quality standards.

The planned pipeline will be the largest construction project in Virginia since the construction of the interstate highway system. It will cross thousands of streams, subjecting them to sedimentation. It will have to blast through 71 miles of limestone geology called karst that is a known geohazard.

On January 9, 2019, the DEQ issued the Air Permit to Dominion to construct their compressor station in Union Hill. On February 8, 2019, the Southern Environmental Law Center and the Chesapeake Bay Foundation filed a lawsuit on behalf of Friends of Buckingham against the DEQ and the Virginia State Air Pollution Control Board for failure to follow the law. Their brief was filed on May 31, 2019. The U.S. Fourth Circuit Court of Appeals in Richmond, Virginia heard the case on October 29, 2019. Listen to the entire hearing posted on the court’s website. 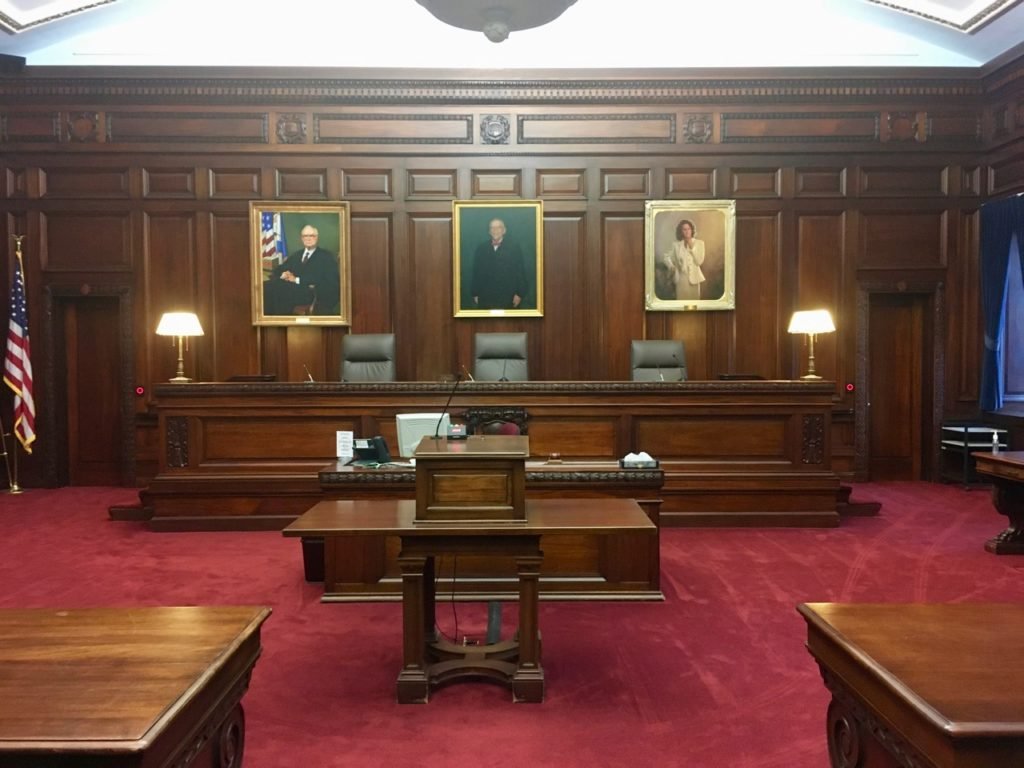 Court #1 in the U.S. Fourth Circuit Court of Appeals in Richmond, Virginia where Friends of Buckingham v. Virginia Air Board was heard on October 29, 2019.

John Laury and his wife, Ruby, live in Union Hill within a mile of the proposed compressor station. He is one of the descendants of freed African slaves who lives in Union Hill. I sat down with him and Ruby at their kitchen table to discuss the situation.

“When did you know about environmental racism?” I asked.

He paused, then answered in a slow, deliberate way.

“I’ve always wondered why the minority and low-income communities seemed to have a pattern of a higher percentage of people with sickness like asthma, cancer, lung disease, and heart disease. I did not know the word for it, but I knew it was there. People of color and the poor lived near the coal ash dumps, the smokestacks, chemicals, and now this compressor station.”

Ruby and John Laury live near the proposed compressor station in Union Hill. Photo by Friends of Buckingham.

John and Ruby are among the growing number of people who have joined to fight the pipeline, environmental racism, and corporate bullying by utility giant Dominion Energy.

Reverend William Barber II speaking in Union Hill. Former Vice President Al Gore is to his left and John Laury is to the left of Gore.

Former Vice President Al Gore called the proposed 605-mile pipeline and compressor station a “reckless, racist, ripoff.” The Reverend William Barber II called it a “scandalous, systemic, sin.” Both called on the governor to stop the environmental racism and the pipeline. No word, as usual, came from the governor or anyone from his administration. 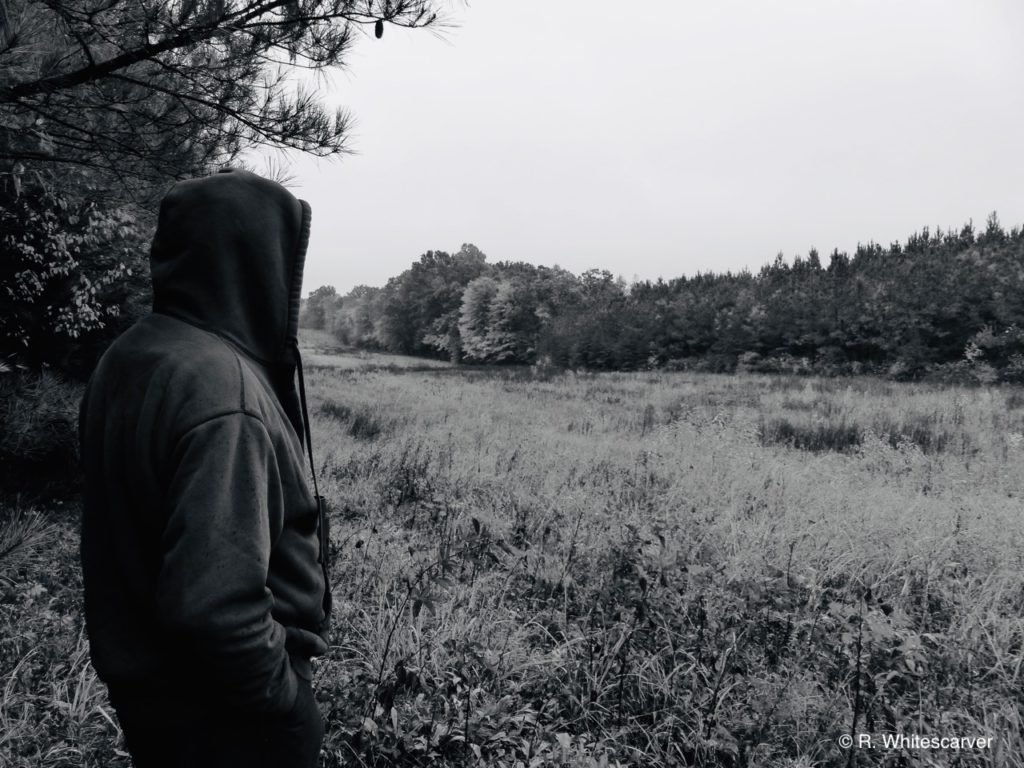 John Laury looking at the proposed site for the Buckingham compressor station.

FERC, DEQ, and the Virginia APCB violated the National Environmental Policy Act (NEPA) and Environmental Protection Administration (EPA) guidelines when they approved Dominion’s site and permit for the Buckingham compressor station. NEPA and EPA require the use of the best and most recent data to determine minority demographics and health issues in the decision-making process. All of them, FERC, DEQ, and the APCB used outdated and misleading data. They used  2010 census data for the whole county of Buckingham. It showed that the site did not impose a disproportionate health risk on minorities. In fact, DEQ argued that Union Hill is not a minority community.

Dr. Lakshmi Fjord, a scholar at the University of Virginia’s Department of Anthropology conducted a survey that was published in September 2018, using actual household data from the people that live within a mile of the proposed site. She concluded that 83 percent of the residents were minorities, far higher than the county average of 34.7 percent—the number used by Dominion, FERC, and the DEQ. The study also concluded that 59 percent of those residents have preexisting health issues. Although the study was submitted to FERC, DEQ, and the APCB  they chose not to use it and concluded that Union Hill was not a minority community.

Clearly, FERC, DEQ, and the APCB violated federal law, federal guidelines, and the civil rights of the people of Union Hill.

The post Environmental Racism and Dominion Energy (JMU 2020) appeared first on Getting More on the Ground.

The Blue Ridge Mountains: A friend at risk – published in Loudoun Now November 2022