Rachel Carson…she’s one of my heroes.   This year for Earth Day (April 22, 2012) it is fitting to honor the 50th anniversary of Rachael Carson’s book, Silent Spring. 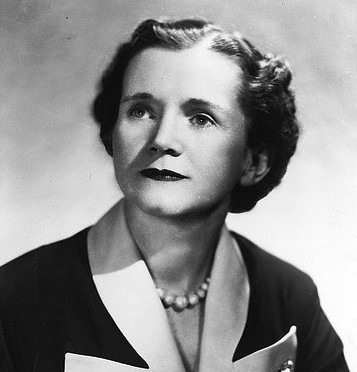 This book moved the world by heightening our awareness of the environment and the affects of indiscriminate use of pesticides.  It ushered in the modern era of environmentalism and caused the eventual ban of DDT, an organochorine insecticide.

DDT is a chemical that persistently bio-accumulates up the food chain; it is linked to causing cancer in humans and wrecks havoc in the environment.  The American Bald Eagle almost became extinct as a result of DDT.

Ironically the chemist that synthesized DDT was awarded the Nobel Peace Prize in 1948 because it was very effective in killing the insects that caused malaria and typhus.  It was used everywhere for any insect problem.  No one knew at that time that it would bio-accumulate up the food chain or cause cancer.

Silent Spring was published in 1962.  It was an environmental awareness tsunami that ignited the public in natural resource conservation.  This movement eventually led to the passage of the Clean Water Act, the Clean Air Act, the Endangered Species Act, the Federal Insecticide, Fungicide and Rodenticide Act, the establishment of the Environmental Protection Agency, the first Earth Day in 1970 and many other environmental milestones that protect our natural resources including HUMANS.

Environmental awareness has continued to grow ever since Silent Spring was published and it has never been greater than it is today.  Environmental Science and Conservation Biology were unheard of in 1962.  Now, these are standard curricula in high schools and universities throughout the world.

When I was a child there were rivers so polluted they were declared “fire hazards”.  Today there are no rivers in this country that are “fire hazards”.  Our rivers and streams are much cleaner than they were in 1962; back then, waste water treatment only removed solids.  Today, in many states such as Virginia, we have the best sewage treatment in the world which not only removes solids but kills bacteria and removes nutrients as well.

Fifty years ago we never heard of fencing cattle out of streams or “open space easements”.  Today, thousands of miles of streams have been fenced off from livestock, millions of trees have been planted along those streams and most states have farmland protection programs.  In Virginia over 600,000 acres of farmland have been protected from development voluntarily with a myriad of incentives.

There are now whole watersheds completely covered with agricultural Best Management Practices making their streams clean enough to stock with native trout.  Poague Run in the city of Staunton,Virginia is one shining example.

Fifty years ago we never heard of “nutrient management”.  Today, every poultry operation in Virginia and every “Confined Animal Feeding Operation” (as defined by EPA) in the country has a nutrient management plan.  Agriculture, in the Chesapeake Baywatershed has achieved half of its nutrient reduction goals to restore the Bay.  This is a great start for restoring the Bay.

Carson opened our minds with Silent Spring and today, pesticide development, release and sale is regulated.  Environmental groups today have “standing” in court; fifty years ago non-profit organizations did not.  Through the efforts of environmental groups DDT, 2,4,5-T (agent orange), Furadan, Chlordane and Toxaphene have all been taken off the market because of persistent bio-accumulation, toxicity and harmful effects to humans and the environment.

The populations of Bald Eagles, Eastern Bluebirds, Atlantic Puffins, California Condors, the American Bison and many more have come back because of grassroots environmental efforts.

We have thousands of public parks, natural areas and forests to manage and enjoy.  We also have tens of thousands of grassroots organizations like the Chesapeake Bay Foundation, Friends of the River organizations, Land Trusts, the Wildlife Center of Virginia and 3,000 local Soil and Water Conservation Districts across the country.  All of this makes a huge difference and all the efforts of individuals from teachers to volunteers make a huge difference because stewardship can only happen…through people.

Let’s keep up the good work, accelerate our pace, set our goals higher and celebrate the wonderful things we have done to improve the natural resources in our care.  Working together we can and do make a difference.

Rachel Carson, thank you for opening our minds and helping us move forward.

The post Earth Day and the 50th Anniversary of Silent Spring appeared first on Getting More on the Ground.

The rains are winding down, the summer heat is upon[...]

Our Winter 2015 Newsletter is now available for download. The[...]