The grazing season is in full swing at Whiskey Creek Angus, and the bulls are in with the ladies. We rotate our two herds of cattle to different pastures about every four to six days depending on the growth of the forage. The tree seedlings we planted last year are doing well because of the ample rains we have received so far this summer. It brings a smile to my face when I observe a tree growing out of its shelter. Maintenance of these forest buffers is especially critical during their first year. Read on to find out what’s happening down on the farm. 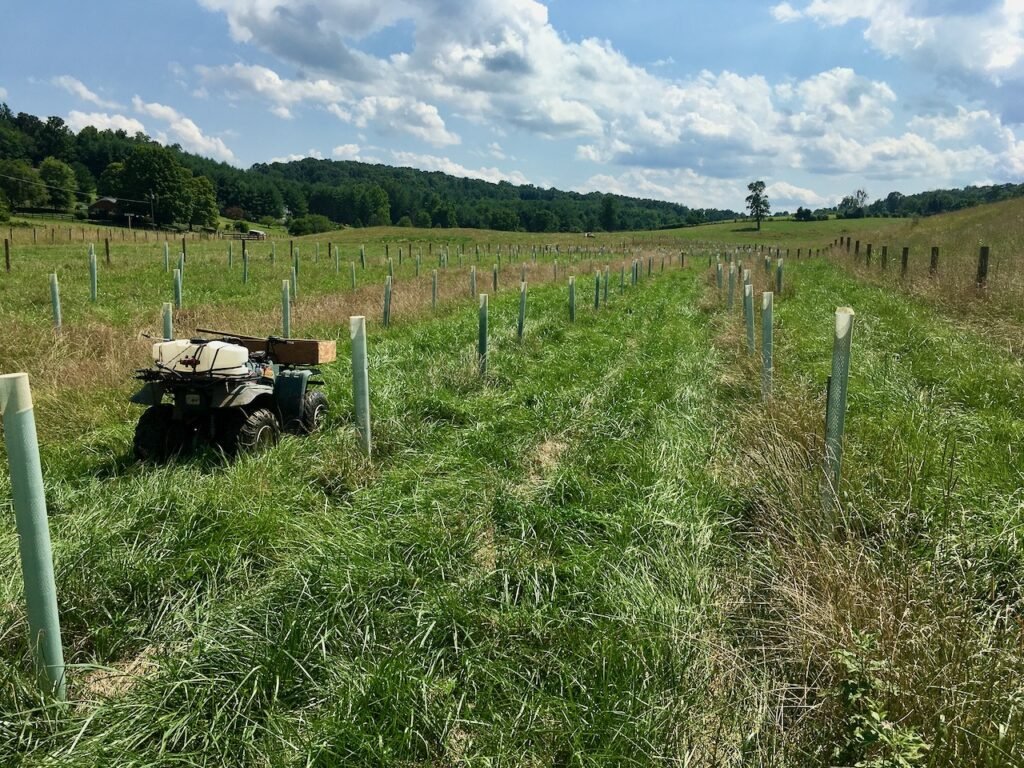 We planted 3,000 native trees and shrubs along the streams on the farm in December 2021. We used five-foot tree shelters to protect the seedlings and put nets over the top to prevent birds from jumping down into the shelter. The shelters are very narrow, so if a bird goes down into the shelter, it dies because it cannot fly vertically to get out. 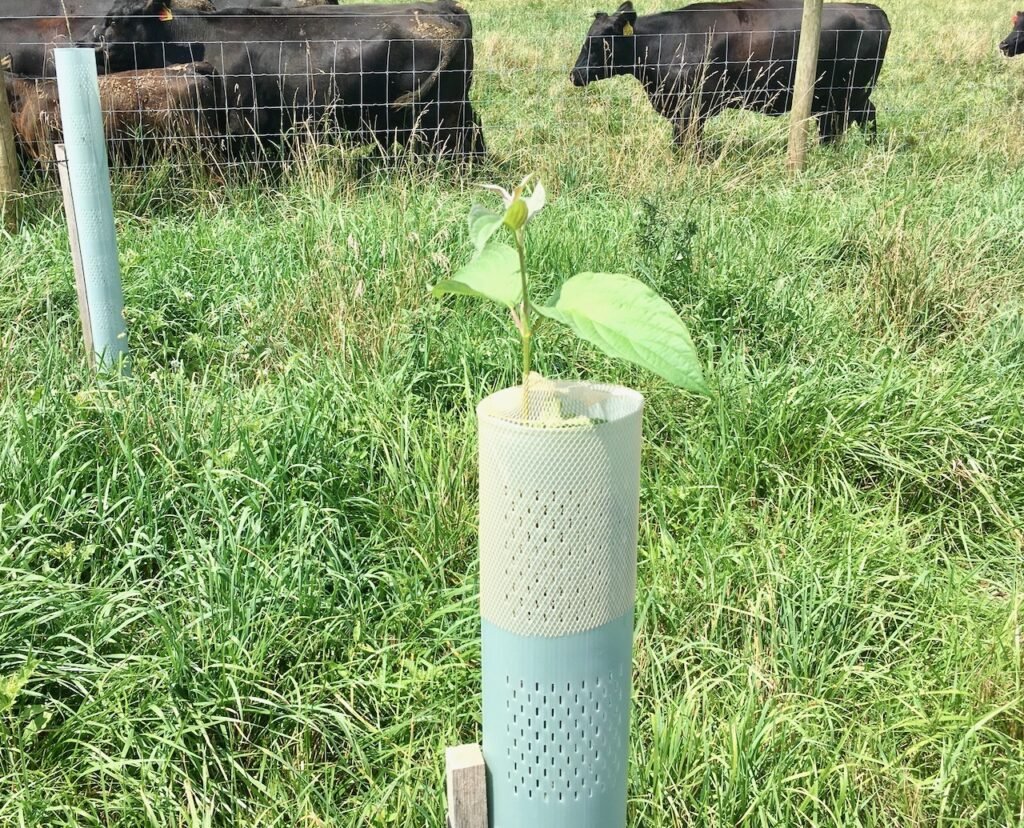 This Red-Osier Dogwood seedling emerged through the hole left by the proper installation of a bird net. Photo credit R. Whitescarver

I never thought I would have to take so many bird nets off the tree shelters this early. As of July 16, I have removed 251 bird nets because tree seedlings were popping out. If the seedling can’t get through the bird net, it will be deformed. It’s imperative to leave a one-inch hole in the center of the bird net so the terminal shoot of the seedling might find it.

One of the most aggravating problems with a tree shelter is when a big weed grows inside it. I lost track of how many shelters (maybe 30) had to be taken off to remove a weed that was taller than the tree seedling. Ragweed is the worst offender this year, followed by Horsenettle. 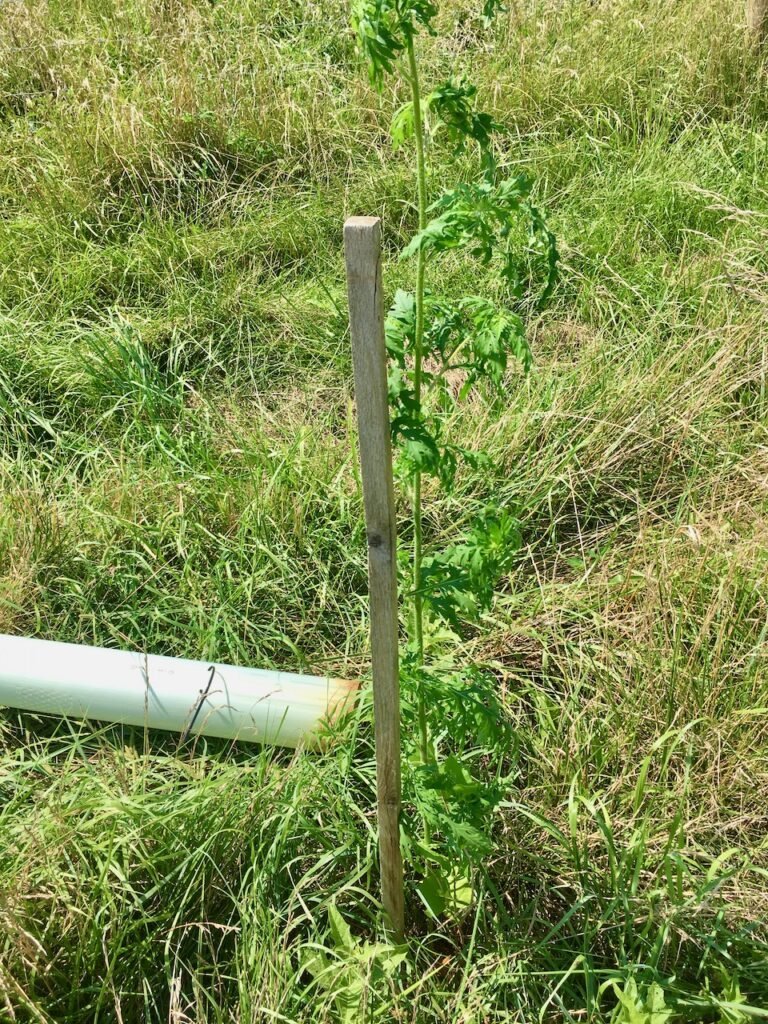 This ragweed was taller than the five-foot tree shelter. I took the shelter off to remove the weed. Can you see the Sycamore seedling? Photo credit R. Whitescarver

Plants in the pastures evolve with the growing season, and now, in midsummer, Thistles, Ragweed, Chicory, and Horsenettle thrive. In late summer, Queen Ann’s Lace will thrive. It’s a constant debate as to when to spray to reduce weed pressure since the chemical that kills the weeds also kills Clover. We won’t spray this year because there is so much Clover. We will just have to tolerate the weeds.

Clipping the pastures to remove the seed heads of the grasses and the weeds is a common practice to invigorate the grass and reduce viable seeds from weeds. Fortunately, we have a 15-foot, batwing rotary mower that expedites this process. 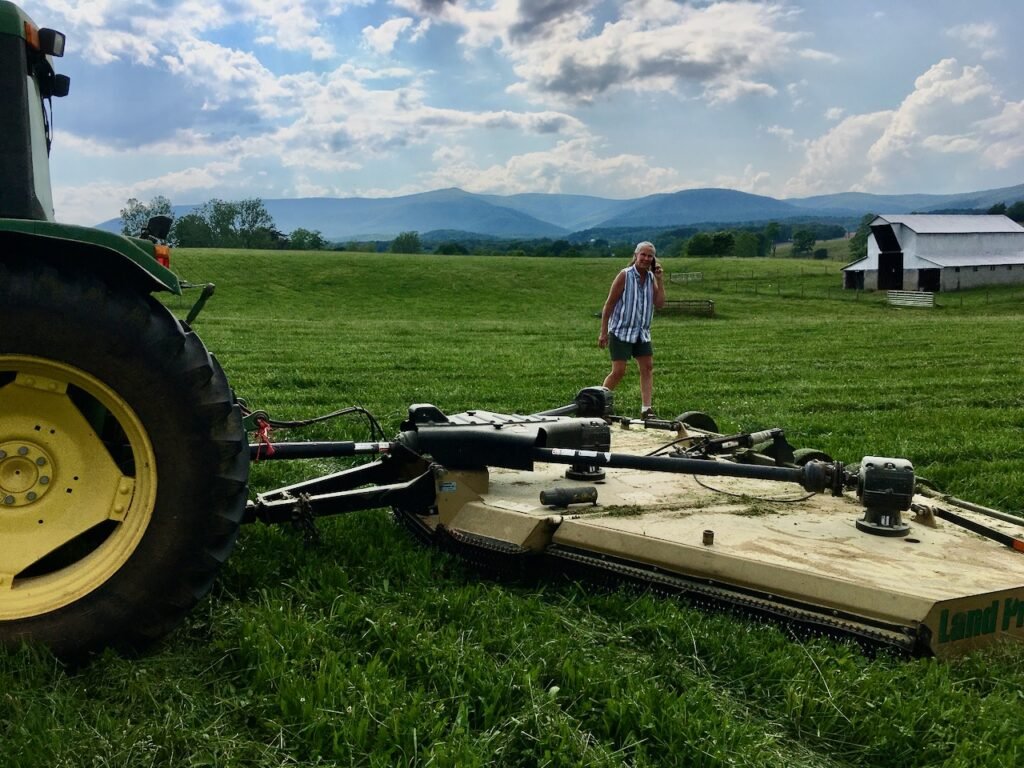 At Whiskey Creek Angus we have several fields that do not have any trees to provide shade for the cattle. In those fields on hot days, we put up a 20′-by-20′ portable shade structure. Moving it around gives our cattle relief from the hot sun throughout the day and makes sure that the manure gets distributed. The structure is just the right size for our herd of 18 heifers. 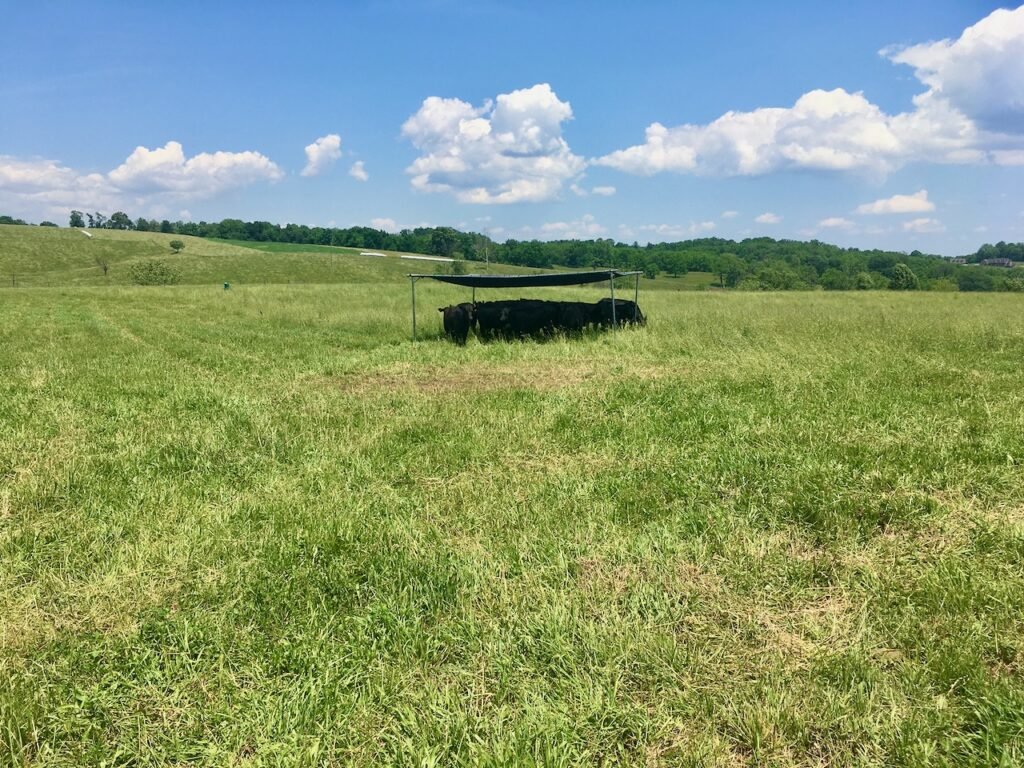 The heifers enjoy the cooler temperatures created by this 20′-by-20′ portable shade structure. During warm days we will move this structure daily to distribute the manure throughout the field. Photo credit R. Whitescarver

As I was hoeing thistles in one of the pastures we can’t mow because it’s too steep for a tractor, I saw movement on the ground through the tall grass. It was a fledgling Grasshopper Sparrow trying to get away from me. The tiny brown ball of fuzz couldn’t fly yet, but it was trying real hard. What a treasure. I heard the parents’ buzzy song nearby. This little bird is going to make it, along with all the other grassland birds that were lucky enough to nest in the fields that we don’t mow or that we delay mowing—about 69 acres or 46 percent of the farm. 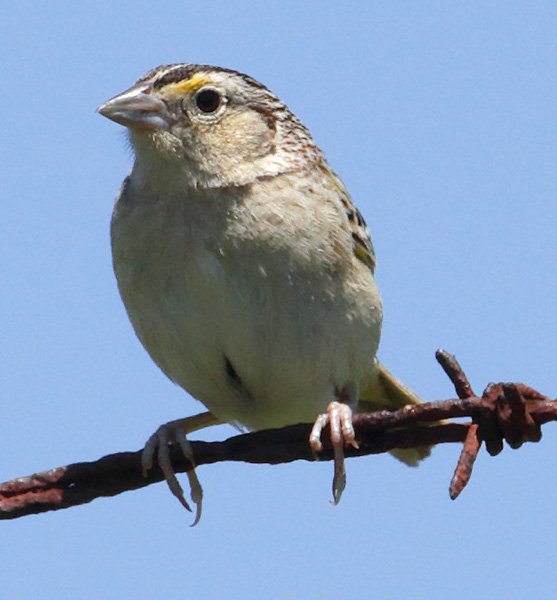 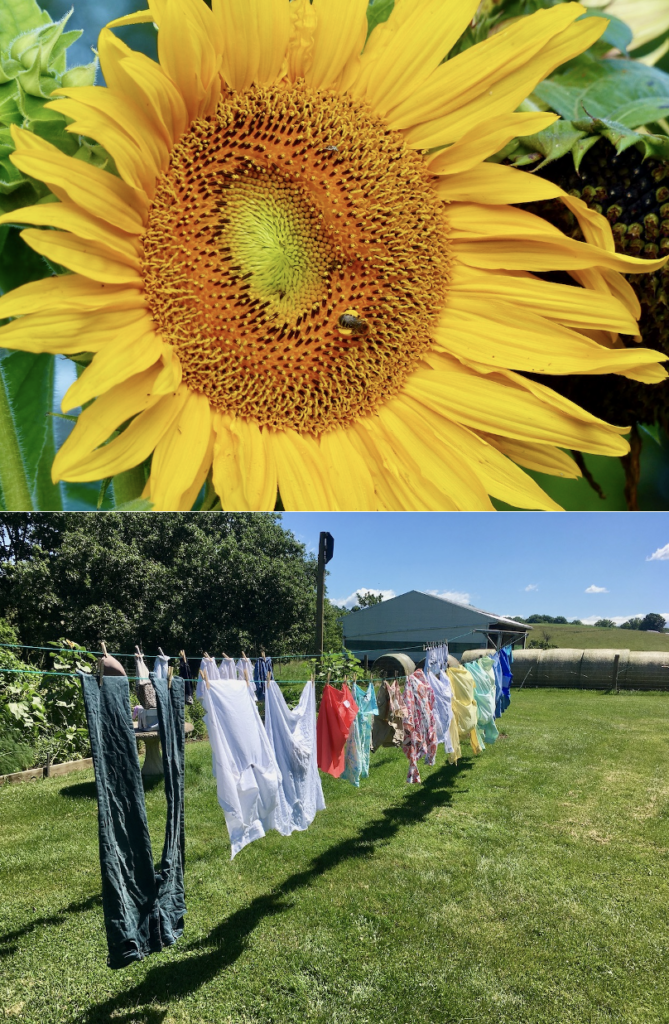 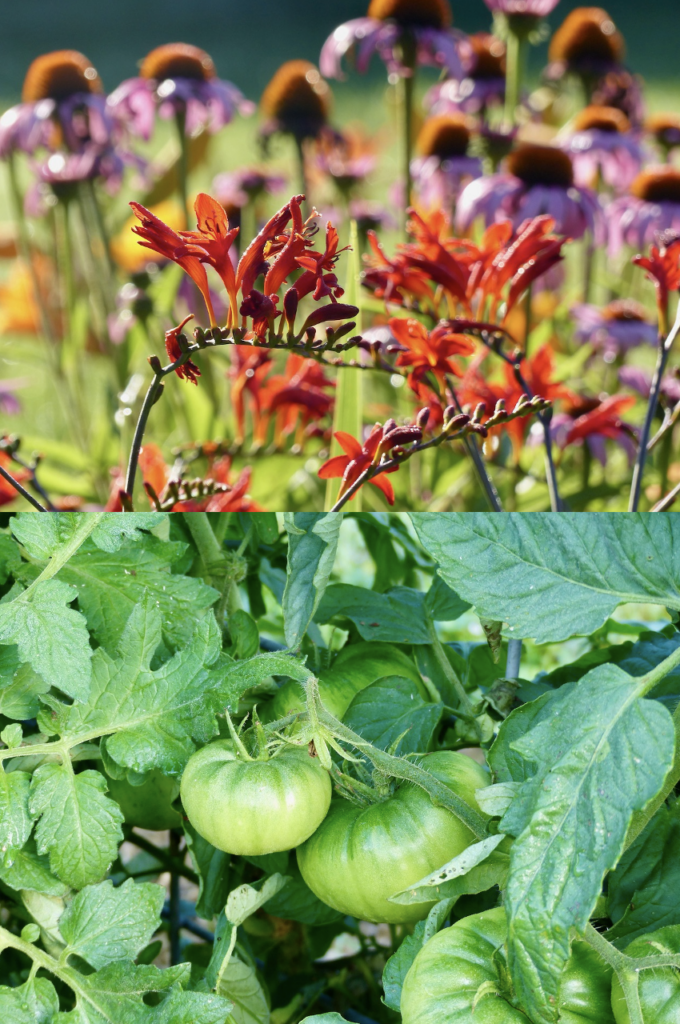 Crocosmia is in the top picture, and “hope to eat soon” on the bottom. Photo credit R. Whitescarver

The post Drams From Whiskey Creek Angus–Summer 2022 appeared first on Getting More on the Ground.

Matthew Soiland of Purcellville, who will attend Virginia Tech College[...]