Earth awakens from the cold during the month of March in America’s legendary Shenandoah Valley.  Days lengthen, migrations begin, chloroplasts awaken and absorb the energy from the sun’s photons –  photosynthesis begins….pastures slowly turn from brown to green.  Life’s energy is on the move. 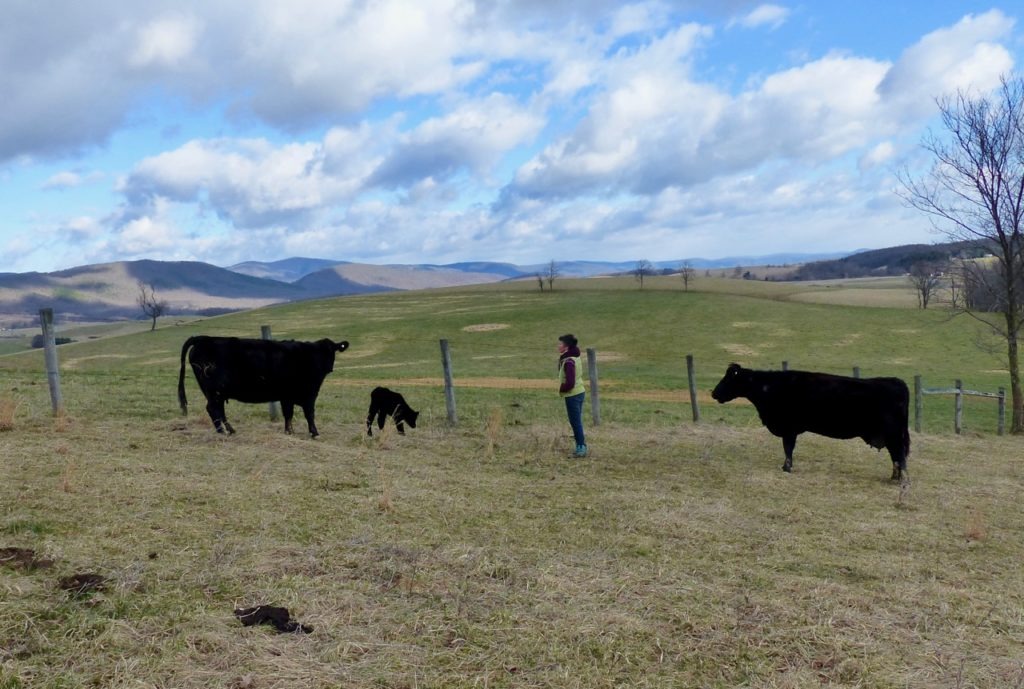 The “high meadow” on the farm in Swoope in March. The grass is waking up. The Alleghany Mountains to the West are in the background.  Newborn #RX11 was born on March 11.  Photo by R. Whitescarver

March.  The end of winter and the beginning of spring.  It usually brings the most severe weather and it’s our busiest month on the farm because we begin calving.  One hundred thirty-eight pregnant cows all due to give birth in the next ninety days.

Red-wing Blackbirds arrived in Swoope at the end of February and that, for me, signals the beginning of the great avian migration.  Each day I look for a new arrival.  A Fox Sparrow one day, Hooded Mergansers and Buffleheads another, an Osprey.  Killdeers amas.  Bluebirds start looking into the nest boxes we put up for them and other cavity nesters.

Each day we feed the cows we check a nearby pond for migrating birds.  Eagles nest nearby.  One day as we drove slowly across the dam I scanned the far end of the pond and “Oh my God,” there were several Sandhill Cranes.  This is very rare for Swoope.  They are on their way to breed in Canada above the Arctic Circle. 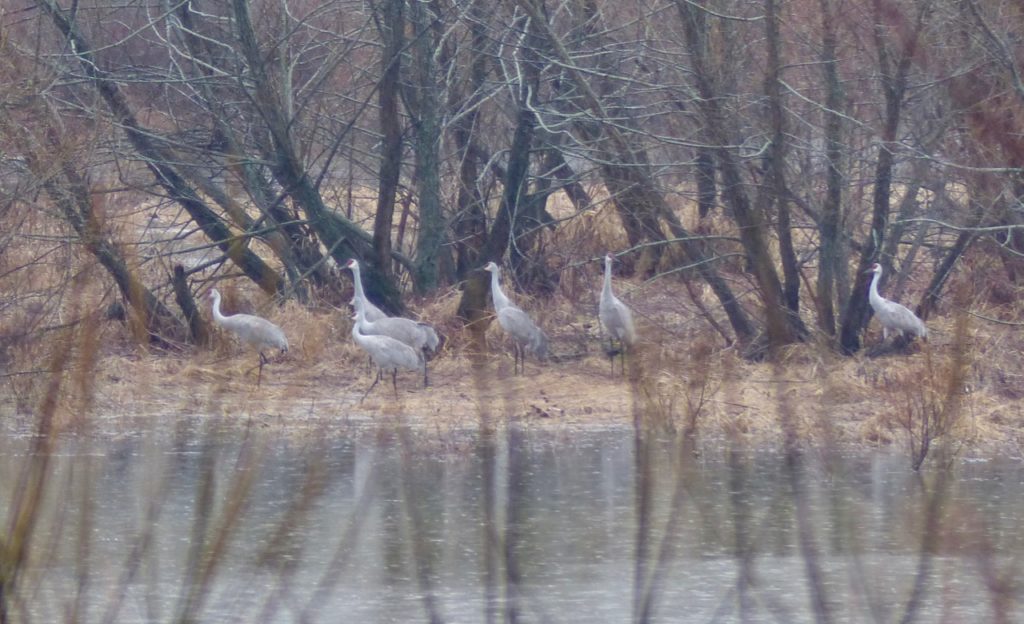 We get up before dawn. Our waking thoughts are outside, wondering if anyone calved during the night’s cold and wind and if the cows were good mothers. Good mothers lick their babies dry to keep them warm and present their udders in a calm way so that the babies find the nourishing teat that will keep them alive.

This day would turn out to be the most dramatic day, so far this calving season.

We tagged* three calves before nine am. Everything looked normal. Everyone is alive and well. The calves run and jump around. I love it when they “kangaroo jump” around their mothers. I see a calf take off running like a deer, his mother chasing after him.

At about 10, cow #X12 had a baby and it never got up. We think it was breech.  We took it to Westwood Animal Hospital.

CJ, the veterinarian came out to the jeep where the newborn laid.  She opened his mouth to look at his gums.

We carried the calf into the small animal hospital and laid him on a stainless steel table.  They put a little cup over his nose to administer oxygen, then lowered him into a warm bath.

“I’ve never brought one back to life from a temperature lower than ninety-four,” she said.

After they got him stabilized they put him in a heated stall and waited for a miracle.  Jeanne and I returned to the farm to check for new babies and to haul hay out of one the barns.

We grafted** a twin calf from a nearby farm onto the #X12 cow.  Eight more babies were born on this day including the #Y4X6 calf.  The mother didn’t claim her baby so we took him into the barn and placed him in the calf warmer for the night. 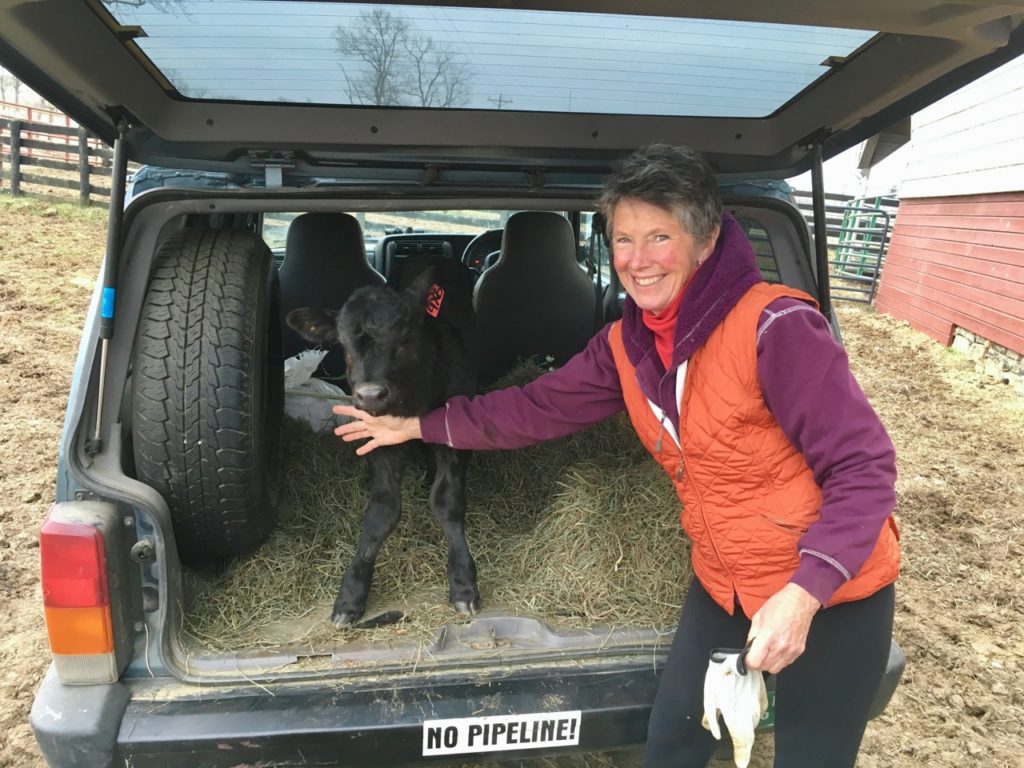 Jeanne with the #Y4X6 calf warm and ready to go back to its mother.

The snow started just before daybreak. The forecast was for 2 to 4 inches, it turned out to be 8.

The 509 cow and calf did great. This is when you say, “wow, I can’t believe they can do this.”  Eight inches of blowing, white-out, snow and the baby is warm and tucked into the hay.  A good mother and a strong calf is a winning combination. 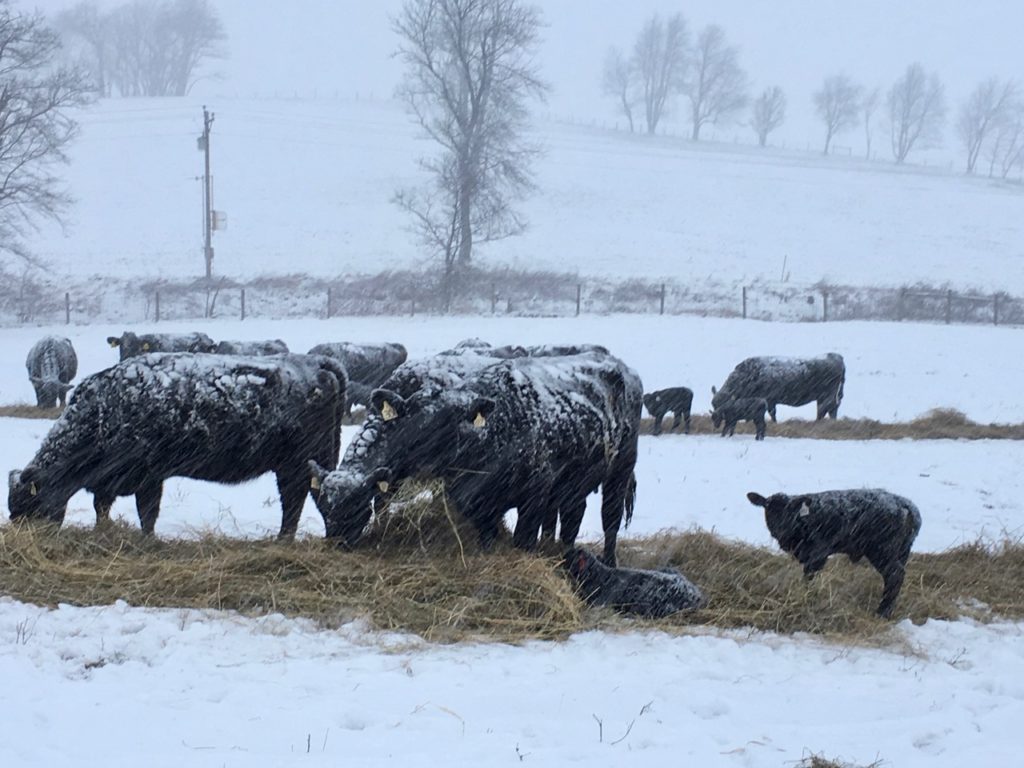 Heifer #61 didn’t do so well. She just didn’t lick the baby dry and the baby got cold.  I picked him up and carried him to the back of the jeep and with him on my lap, Jeanne drove toward the barn.  Jeanne made the sounds of a pitiful calf and the mother followed us all the way to the barn.

We put the calf in the “cooker”*** and the cow in a nearby stall.  After the baby got warm, we put the two together in a stall to bond.  The mother made good sounds with her baby and licked him.

We had to get cow #115 into the barn. She had twins and the babies just weren’t getting enough milk. But she’s got this huge udder. While checking for newborns, we stole one twin, put him in the Jeep and drove him to the barn. Next, we put a halter on the remaining twin and put him on my lab in the Jeep. Hopefully, the mother would follow us for half a mile through five fields to the barn.

By making a sick calf sound and with patience we all arrived at the barn. After she settled down a bit we put her in the head catch to investigate her udder. Her starboard teats were fine but her port side was the problem. The front teat was nothing but blood (mastitis) and the hind teat was empty. We let the twins nurse her starboard side down and then we supplemented them with a half bottle each of milk replacer.

The cow got some antibiotics in the infected teat and some penicillin.

I went to the river field to clean out a few nest boxes in the North tributary. Finally! Tree Swallows. I’ve been waiting for them for weeks. Last year they arrived on February 24th. 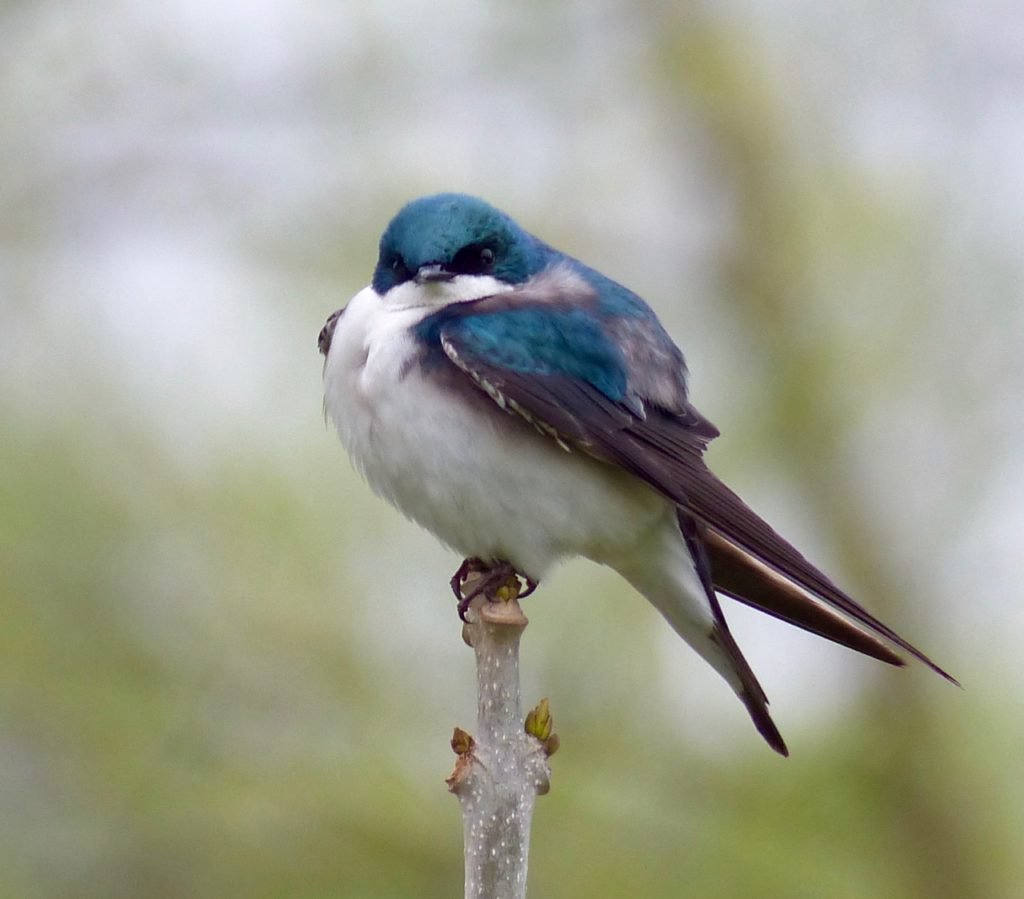 Tree Swallows nest on our farm at the river. The males usually arrive about the same time daffodils bloom.  Photo by R. Whitescarver.

When they get here, it’s the first day of Spring for me. They came from Florida and Cuba to nest here.

Calf #65 in Wheatlands is lethargic. Has a fever. 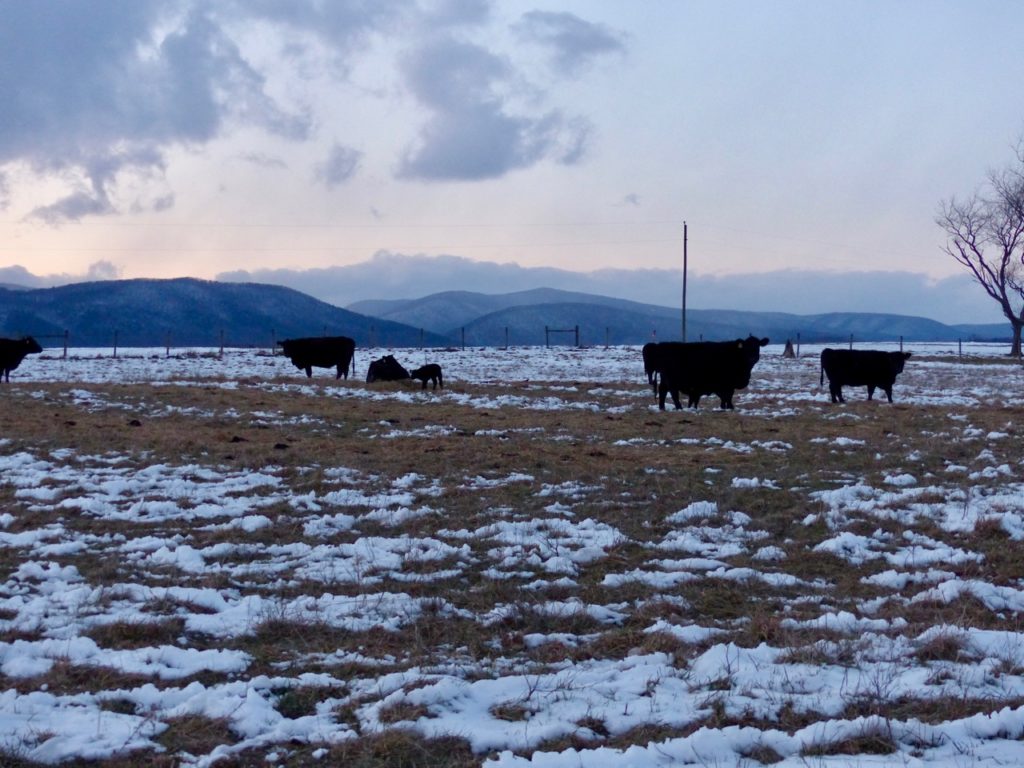 Swoope in winter. Newborn calves in the foreground. Buffalo Gap in the background. Photo by R. Whitescarver.

* Footnote 1.  Tagging a calf: Catching the newborn, administering two shots of vitamins, banding (a form of castration) any bull calves, iodine the navel and putting a tag in the left ear with the same number as the mother.

**Footnote 2. Grafted: The act of making a cow think another calf is hers.  This is done by skinning the dead calf and attaching the skin to a live calf.  Cows have a tremendous sense of smell.  We usually administer a sedative to the cow and then present the cloaked calf.

*** Footnote 3. “The Cooker”: A calf warmer.  It looks like a large lunchbox.  It has a cabin heater in it.  We use it to put hypothermic calves in to warm them up.

The post Cows, Calves, and Cranes – Swoope Almanac March 2018 appeared first on Getting More on the Ground.

Peace and Tranquility on the Main-stem of the Shenandoah River

This tranquil scene on the Main-stem of the Shenandoah River[...]

GCA Story Map Up and Running

Click on the image to visit the Story Map GREAT[...]