A farm in the Shenandoah Valley of Virginia was going to be the storage site for millions of gallons of industrial food waste and other sludges until the community rose up to fight the project. Industrial food residuals, poultry slaughter rendering residuals, and bio-solids from other counties and perhaps other states were headed for this rural community. The withdrawal of the permit for the building of the 3-million-gallon storage tank was a huge victory for the citizens of Churchville and a crushing blow to an industrial waste hauling corporation. It was environmental activism at its finest—strong local leadership, an informed community, respectful debate, and relentless pressure. 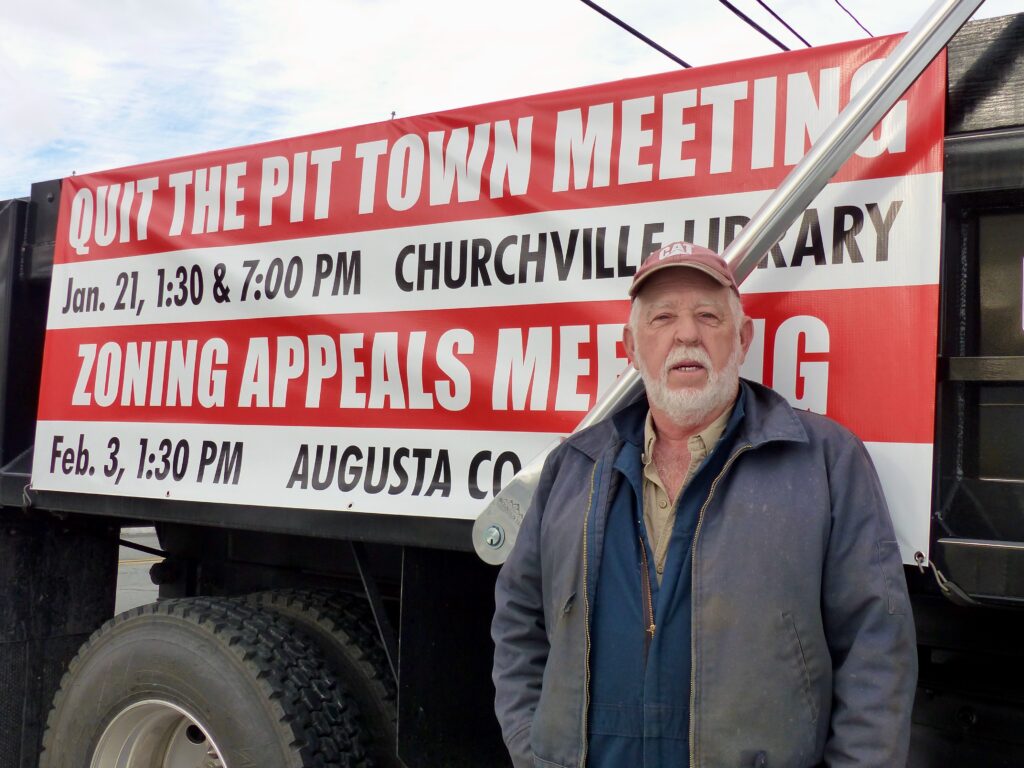 Leading the opposition was local resident Darrell Campbell, an excavating contractor who lives across the road from the farm where the sludge pit was planned. He received a letter from Augusta County, dated December 16, 2021, informing him that the Houff Corporation had requested a special use permit to construct the sludge pit to store biosolids or manure and that the board of zoning appeals would hold a public hearing on January 6, 2022.

Darrell showed up at our door the day after he received the letter. We would not otherwise have known about the sludge pit plans because we are not adjacent landowners. We can see the farm where the pit was to be located from our house, but the county is only required to inform the adjacent landowners of the impending action.

Only 21 Days to Mobilize the Community for the Public Hearing

Darrell took a petition to the residents within a mile and a quarter of the proposed pit and got 218 signatures opposing the action. Many people from Churchville showed up at the public hearing and several spoke. I was so proud of each speaker. They were respectful, truthful, and spoke from the heart. After we had our turn to speak in opposition, I thought, Who could possibly vote in favor of the pit?

Then the spokesman for the corporation took the lectern for rebuttal. He had an answer for everything and went on and on. It was exhausting.

After the loquacious speech from the sludge pit applicant, the members of the Augusta County Board of Zoning Appeals had their turn to debate among themselves. Based on the questions they asked, I thought they were going to vote in favor of the pit. The chairman, however, suggested tabling the vote for 30 days to see whether another site on the farm would be more suitable. The vote would take place during their next meeting on February 3. 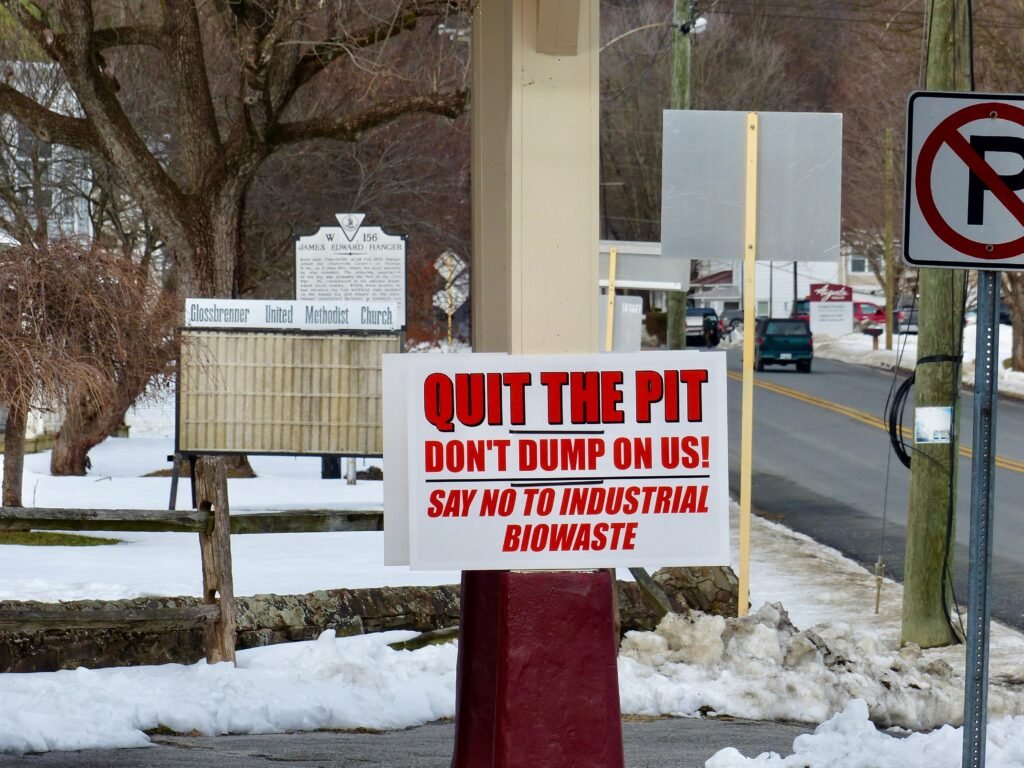 Our Water at Risk

Augusta County has the most active karst geology in Virginia, with sinkholes, solutions channels, and caves abundant in the area. Because the material might leach into the groundwater here, where most residents use well water, it’s not a good area to spread industrial food waste. 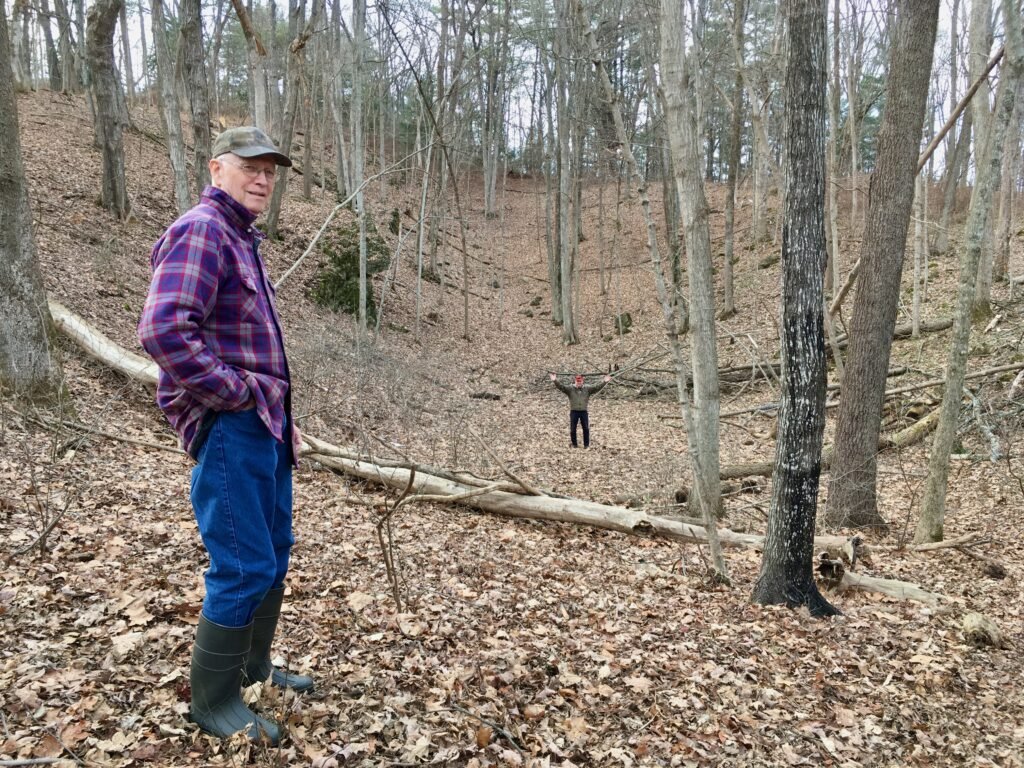 Churchville resident Herold Munson is in the foreground of this sinkhole. Bobby Whitescarver is in the bottom of the sinkhole. Photo credit J. Hoffman

Herold Munson is an adjoining landowner to the sludge pit site. One of the biggest sinkholes I’ve ever seen is on his property. Sinkholes are the result of land subsidence caused by voids in the earth. A 3-million-gallon concrete tank, 192 feet in diameter and 16 feet deep can hold 12,000 tons of sludge. Land subsidence underneath a pit this size would be disastrous.

When I saw the cropland where the sludge pit was planned and where the sludge would be spread, my heart sank. Here it is in the middle of winter, and not a single field was fully protected from soil erosion or excessive runoff. Corn silage had been harvested in some fields and no cover crops had been planted. Soybean residue sat in other fields with no cover.  Some fields appeared to be planted with cover crops but much too late to provide adequate cover from the erosive forces of rainfall. 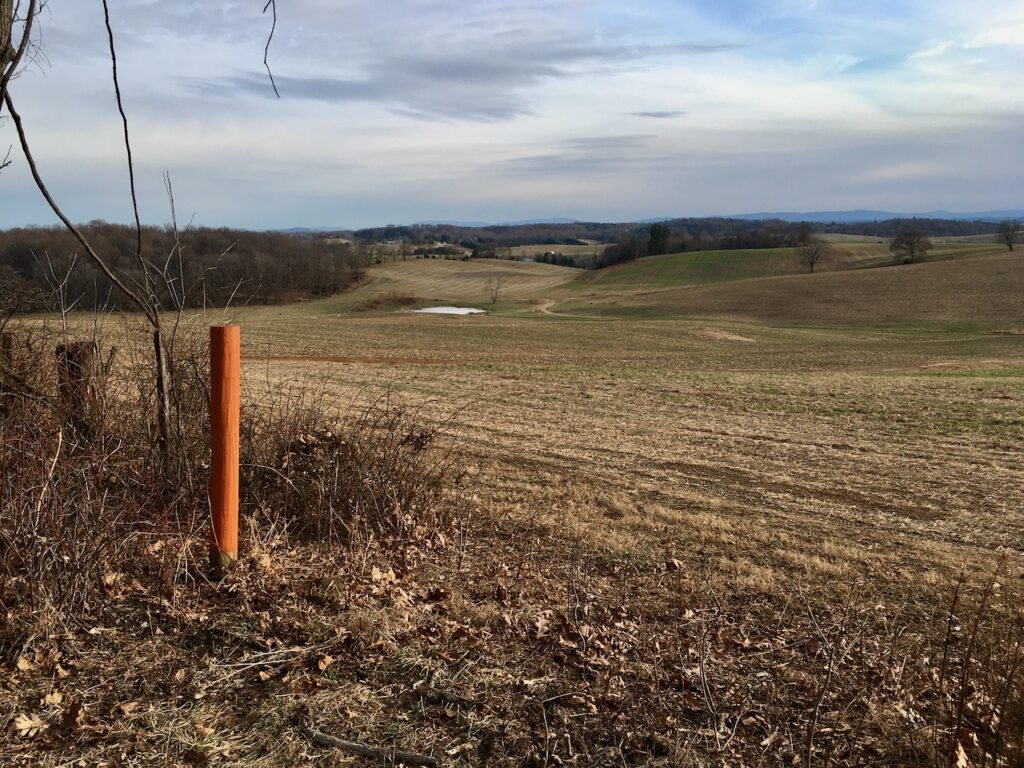 View of the cropland that was to receive industrial sludge. Not a single field is fully protected from erosion. The photo was taken from the adjoining property in January 2022. Photo credit R. Whitescarver

Industrial food residuals, biosolids, or even manure applied to these fields would be an open invitation for groundwater contamination and excessive runoff of pollutants. It should not be allowed.

After the one and only public hearing, activists organized two community meetings to inform the public about the sludge pit, to give them an opportunity to ask questions, and to inform them of the path forward should the board vote in favor of the pit. Over 100 people attended each meeting.

One neighbor told of his experience with this type of sludge that was spread on his farm. He called it “olfactory armageddon.”

Throughout the meetings, people spoke with respect and knowledge. That behavior is important for successful activism because decision-makers will not likely listen to disrespectful debates or tolerate unruly behavior. 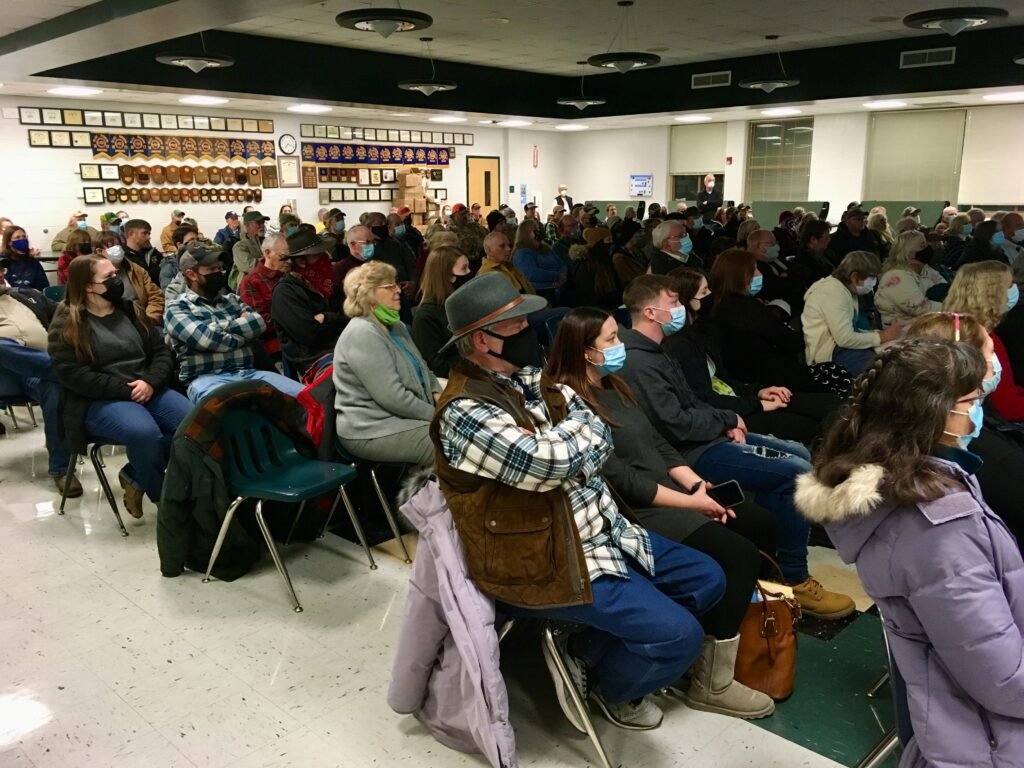 On January 24, the Houff Corporation withdrew its application for the sludge pit.

Four things led to the defeat of the sludge pit. First and foremost, a leader with skin in the game became the face of the opposition. Darrell Campbell lives next to the farm where the pit was to be installed. He would have been directly affected.

Second, grassroots leadership educated the citizens so they could speak from knowledge rather than emotion.

Third, the opposition remained levelheaded. Decision-makers on governing boards are turned off by brazen outbursts and disrespect.

Finally, relentless pressure on the decision-makers and on the applicant forced them to withdraw the permit.

Changes Needed to Prevent Sludge Pits in Your Community

Without Darrell Campell’s swift leadership to inform the public, the zoning board would have approved the Churchville sludge pit. With only 21 days’ notice and only the adjoining landowners informed of the sludge pit plan during the week before Christmas, it is doubtful the wider community would even have known about it. The locality did what was required by law, but shouldn’t notice be distributed more widely and perhaps a longer period provided for public participation?

How is it that biosolids, industrial food wastes, and other sludges can be brought into a community from other localities without the community members’ knowledge? We need greater oversight and public participation to regulate the transport of foreign substances and their application to the land.

We learned that the food waste industry is using abandoned manure pits to store these sludges without permits. Are these former dairy manure pits grandfathered in?

The application of biosolids and industrial food residuals to farm fields is permitted by the Virginia Department of Environmental Quality. These permits require a nutrient management plan for the fields where the material is applied; however, an NMP does not require that the fields be protected with conservation measures to reduce soil erosion and prevent excessive stormwater runoff. The nutrient management regulations need to change to require those preventive actions.

Contact your county supervisors and state legislators to encourage them to make these changes.

The post Churchville Sludge Pit Application Withdrawn—Environmental Activism at Its Finest appeared first on Getting More on the Ground.

Keep Your Pets and Livestock Away from Potentially Harmful Algae Blooms

The post Keep Your Pets and Livestock Away from Potentially[...]