Green grass emerges from its brown, dormant cloak of winter. Northern Harriers glide and teeter, close to the ground in search of anything that moves. In the vast grasslands of Swoope, Virginia, the headwaters of the Shenandoah River it’s voles they hunt. American Plum pushes forth its white blooms, and the metallic-blue, white bellied, male Tree Swallows arrive to guard nesting sites for their lifetime mates. This is March, the beginning of calving season on our beef cattle farm. 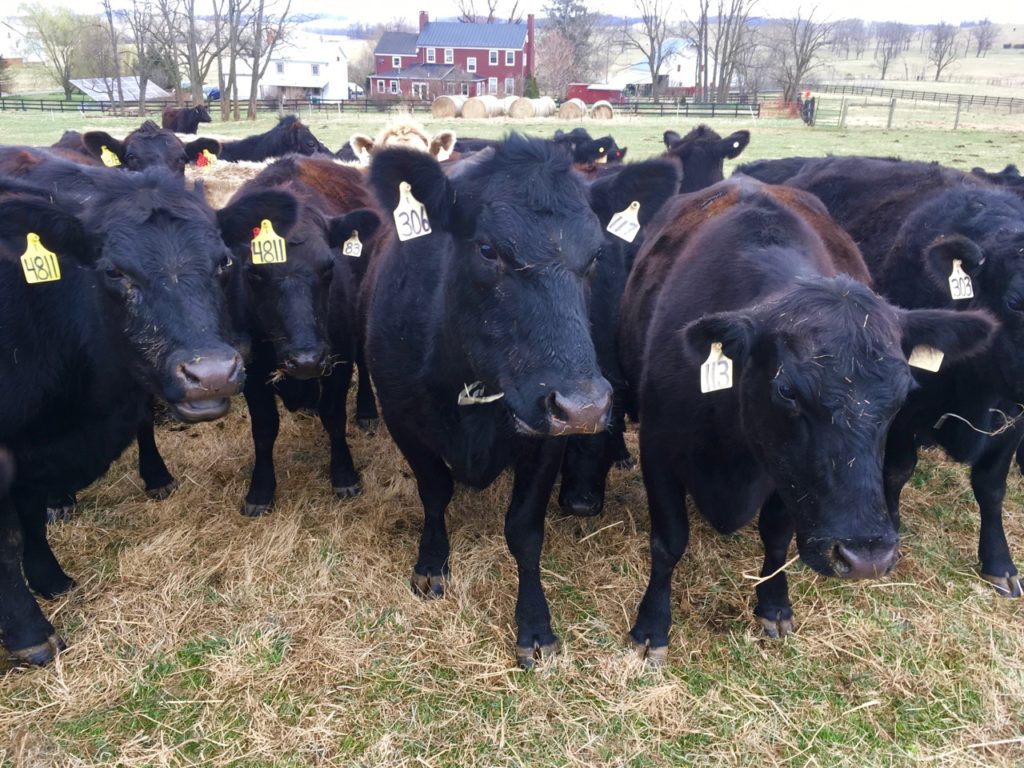 The “Backfield” herd. They are all pregnant and in great condition.

We have 135 pregnant beef cows that will give birth beginning around March first. It is absolutely the busiest time of the year on the farm and most days and nights during March we have to be on…24/7. Seventy percent of the calves are born during the first thirty days.

The cows are divided up into two groups of mature cows and one group of first calf heifers. This year we have 25 heifers. We keep them in the small fields close to the house so we can keep close watch on them because sometimes they do not know what is going on; they can do anything from being dumb to freaking out – screaming and hitting their baby.

Jeanne is the Herd Master

Jeanne, a ninth generation farmer is a cow whisperer.  She’s hard driving with little patience.  But when it comes to calves, her patience emerges.  She can think like a cow.  I saw a cow one time, dip her head at Jeanne and start charging.  I would have run.  Not Jeanne, she charged the cow!  And sure enough the cow went the other way.  All this and pearl earrings too.  I call her the Princess of Swoope. 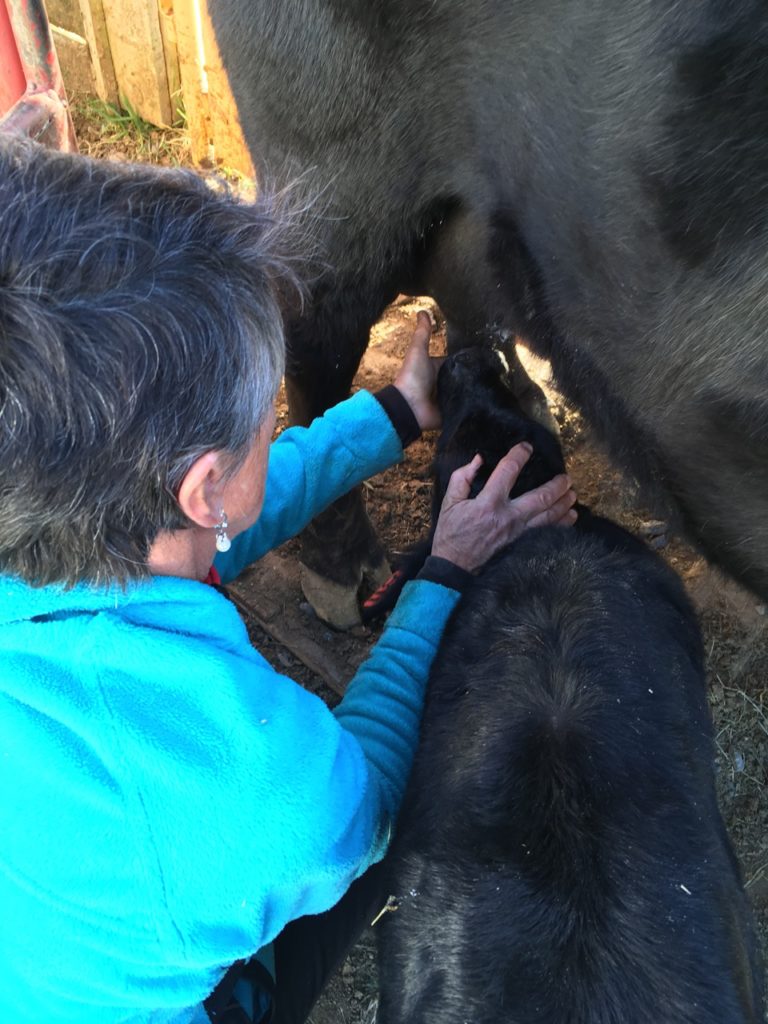 Jeanne teaching the #811 calf to nurse his mother.  The cow has a condition called “balloon teat“.  Click this hot link for a guide to the Angus “udder scoring system“.

There is inevitably a storm or a blizzard during every calving season and we try to prepare for it. Any calf that dies, we blame ourselves for lack of attention or endurance. I remember one year we had a snow-blowing blizzard during a full moon; nine calves were born and four perished from exposure before we could get to them.  To this day we still blame ourselves.

This year, Winter Storm Stella brought arctic cold wind and sub-zero temperatures during a full moon. We were lucky, only receiving two inches of snow as opposed to what was forecasted. This is when we “farmer-up”. The cold was not going to take a single baby from us if we could help it. 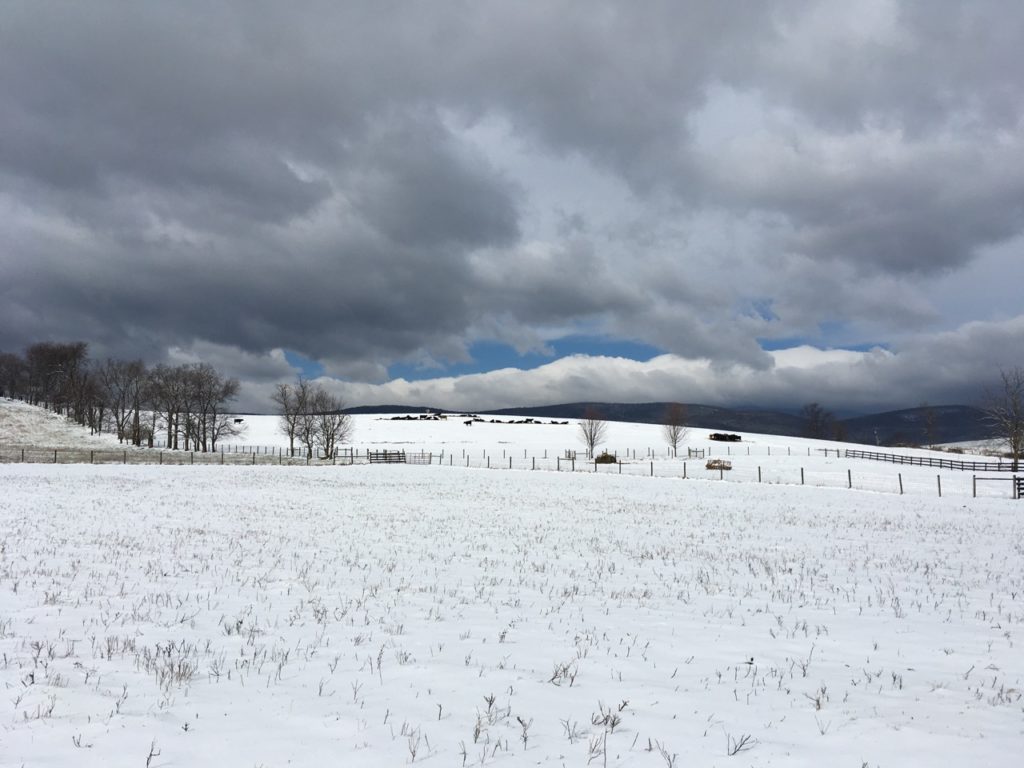 Our farm during Winter Storm Stella.

March 14th, 7:30pm: We checked the cows in the “Backfield” group. It was snowing, 26 degrees(F) with a howling wind making the temperature far below zero. Cow #X2’s baby is shiverring on the ground.   It is cold to the touch. Jeanne puts her finger in its mouth, barely warm. We pick the calf up and carry him to the back of the Jeep. Jeanne’s old mail Jeep is a perfect calf carrier.  I call it Uber for calves.

With the back hatch open, I sit in the back of the Jeep with the cold, wet calf on my lap. Jeanne drives the Jeep slowly toward the barn while making a sick calf call…the mother follows in a panicked kind of way. I watch her bulging eyes and breath shooting out of both nostrils as she follows. She smells her baby, screams a little then follows. A couple of times the cow puts her head in the Jeep.  Her head appears much larger than normal to me as she smells my face, looking for her baby.

A few times she gets confused and runs around the Jeep. We stop, set the baby out on the ground, let the pair reconnect then back into the Jeep to the barn.

At the barn, Jeanne opens the gates and I carry the calf to what we call the “porch”. It’s an extension of the barn having a roof and two sides.  It will be much warmer where they can be out of the wind and bond in private.

10:30pm: We check the “Wheatlands” group. Cow #125 calved and it is cold to the touch. It will probably not survive the sub-zero temperatures. We pick him up, put him in the Jeep and return to the barn, leaving his mother alone in the dark.  We put the calf into the “calf cooker”. It’s actually a calf “warmer” and it looks like a big lunchbox with a heater in it.  His mother will be miserable, looking for him all night but her baby will live. 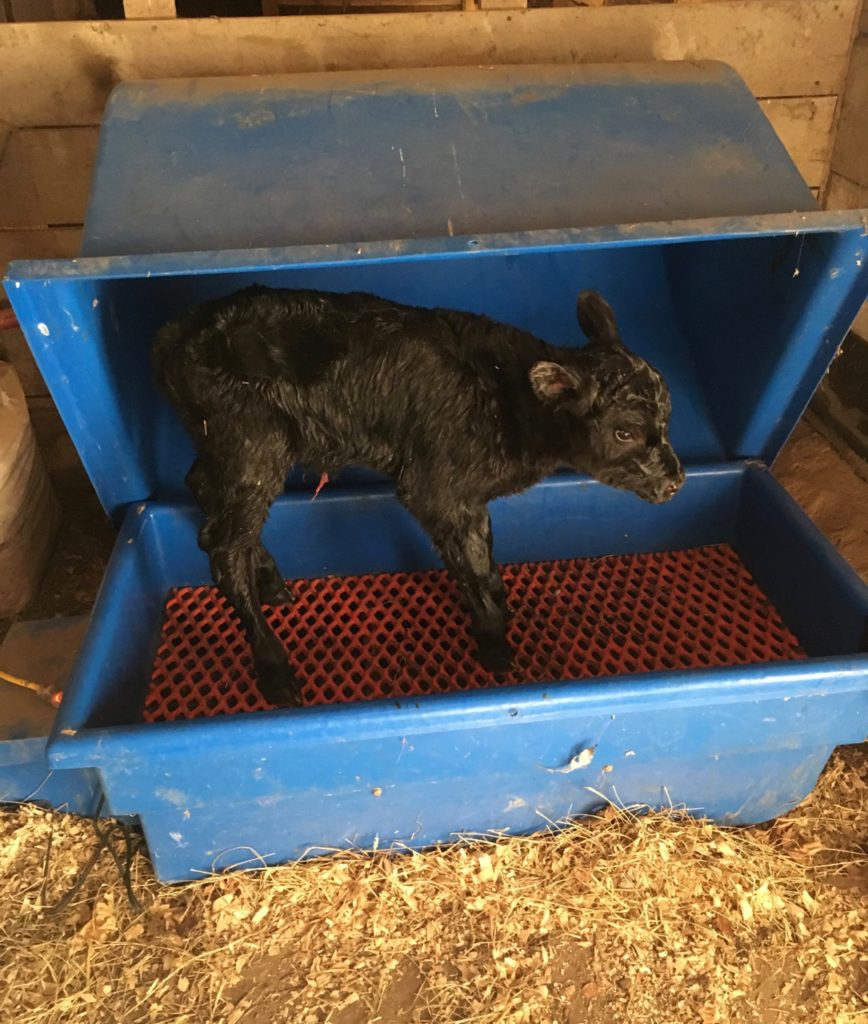 This is what we call the “calf cooker”. It’s actually a PolyDome Calf Warmer which has a small electric heater. We put cold newborns in it to bring them back to life.  This one is warmed up and  ready to go back to his mother.

There aren’t any additional cows with calving behavior so we go to the house for some rest.  Laying in bed, while Jeanne sleeps, I worry if I had put the calf cooker on too hot a setting. Tomorrow we may have potroast..

Up at 5am. Thirteen degrees and strong wind. Suit up in coveralls, boots, coats, gloves…the moon lights our way to the barn. The ground crunches as we walk. Filled with anxiety we hope the baby in the “cooker” is alive. We peek into the cooker and presto! The little guy is standing up and gives us a loud good morning Baaaa! “I want my mother!”.

Jeanne and I take the baby to its mother in the Wheatlands field. It’s not quite pitch dark due to the full moon so we drive with no headlights. We assume she, as a good mother, will be in the same spot where she calved. She is.

We drop the baby off right in front of her and they immediately hook up.

For the rest of the morning, two more cold babies receive the “cooker” treatment.  It’s like a revolving door on this fridgid day.

1pm: Jeanne and Bob (our helper during calving) see cow #414 is in labor. One foot out and a nose. Where is the other foot? A foot back is really bad.  Both may die unless assisted. They walk her into the barnyard and into the chute. Once her head is caught in the head catch, Jeanne goes into the womb with her arm, finds the leg that’s back, brings it forward along side the other leg and puts calf-obstectric (OB) chains around the two feet. I’m holding the cow’s tail, Jeanne and Bob are in the chute directly behind the cow. They attach handles to the chains and gently pull the legs when the cow pushes. It’s an easy pull. The warm calf comes out and they carry it to the adjacent pen.

We are all bewildered.  The calf is dead.  Could we have done more?  Was it our fault? She wasn’t in labor that long; it was an easy pull. What happened? That calf should not have died.  Where did we fail? Why did the calf die?  We will never know and we will live with that thread of guilt for a long time.

She will lick the dead baby dry trying to make it live, not understanding.  We all know what has to be done; graft a calf on this mother.

As we continue checking cows and calves in the sub-zero temperatures, Jeanne gets on the phone to our beef cattle neighbors to see if anyone has a twin or orphan calf they want to sell. We are going to “graft” a baby onto the #414 cow.

We exhaust all of our beef cattle friends. There are no extra babies out there at the moment due to the weather. When there are no beef cattle babies, we resort to dairy calves. I call my friend Kieth in Weyers Cave to see if they have any babies for sale. Bingo! They have one.

3pm: Jeanne feeds hay to the herds with the tractor. Bob, drags the dead #414 baby to the other side of the barn and hangs it from an iron hook to skin it. He leaves the umbilical cord and tail intact with the skin.I put our border collie, Val in the Jeep and drive to Weyers Cave to get the dairy calf.

Keith meets me at their maturity barn. It’s a five day old Holstein bull calf. It’s a pretty big black and white calf. Keith helps me lift him into the back of the Jeep. The calf stands up in the back and remains fairly calm.

Keith says, “Well, are you going to tie him up or anything?”

My mind flashes back to other beef calves I have picked up for this purpose which was like wrestling with a billy goat in a small cage.

Val, takes a look at the calf.  I guess to him it looks like a giant border collie. He sneaks into the footwell of the passenger seat, curls up and hides his head between his paws.

Off we go. The bull calf stands up the whole time during the forty-five minute drive back to the farm.  He would make a great sailor with that kind of balance.

Meanwhile, one of the heifers, #152 has just had her baby so Jeanne and Bob put the pair on the “porch”. The mother will lick that baby warm.

Uber for calves arrives at the barn.  Bob and I put him in the cutting room of the barn and tie the black Angus skin on him with baler twine.

She Takes the Calf

Bob and I walk the Holstein calf wearing his new “skin” in front of the cow in the head catch. She takes several deep smells and gives out a cow’s motherly sound. It’s the “Oh my God, it’s my baby” sound.  Once we hear that sound we know it’s going to work. Jeanne places the calf along side the cow and his head near the udder and wow, the calf starts sucking immediately. The cow makes more cooing sounds.

We release the cow from the head catch and put the two in the pen next to the chute to let nature take it’s course.  That dairy calf nurses for all he’s worth.  He’s much taller than a beef cattle baby so he has to turn his head sideways to suck.  He sucks her on his knees even nursing while she lays down. He has hit the “mother load”!  A happy pair. 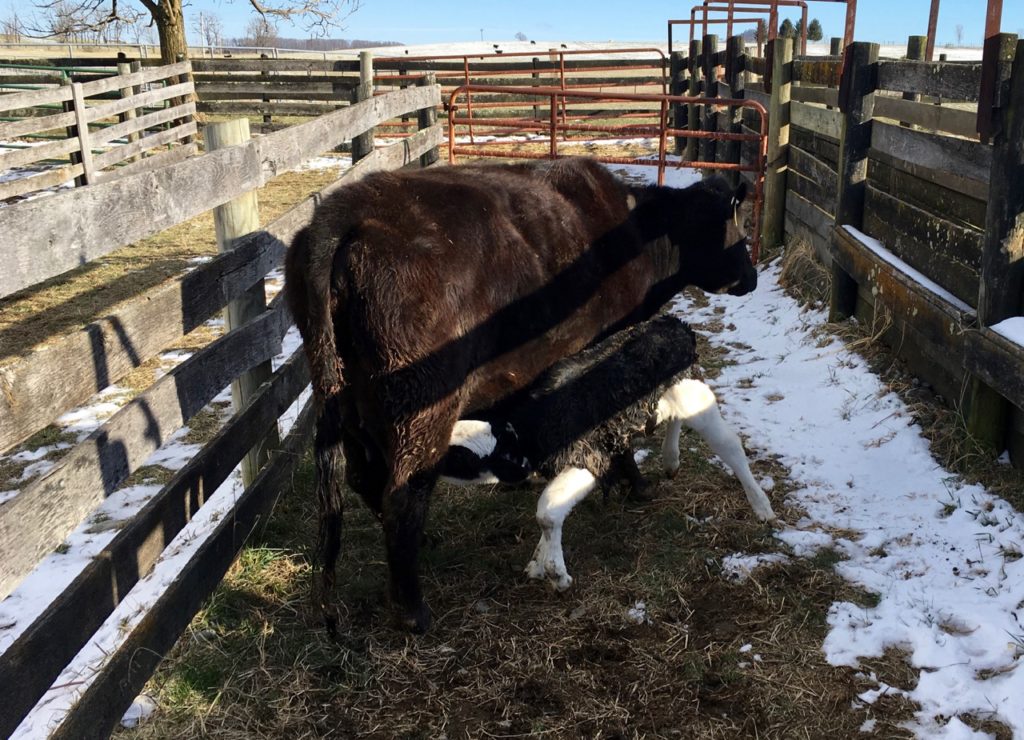 Cow #414 with her miracle baby. Jeanne grafted a Holstein calf onto her using the skin of her dead baby and happy drugs.

7:30pm: Back to the calving fields we go. It’s still sub-zero and windy.  Only a strong newborn calf and a good mother can survive in this kind of weather. In the Backfield, cow #44 had her baby.  It is up, dry and sucking; they will be fine. On to the Wheatlands field. As we drive in I see a Bald Eagle fly over the pasture in front of us with the snow covered mountains in the background.  The Eagle is carrying a large stick in its talons, nesting material.

This moment concluded another day during calving season.  We both feel so fortunate to be farmers and to be living in such a beautiful place.  Even though the days are long sometimes, it makes us appreciate the hard work of all farmers.  We don’t think of it as work but rather a chosen way of life.

The post Calving Season: Swoope Almanac – March 2017 appeared first on Getting More on the Ground. 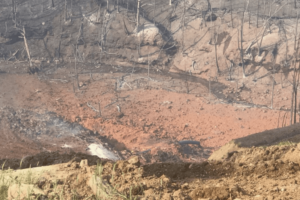 The Virginia State Water Control Board must deny 401 certification[...]

Check out our article in Wander Magazine

The post Check out our article in Wander Magazine appeared[...]