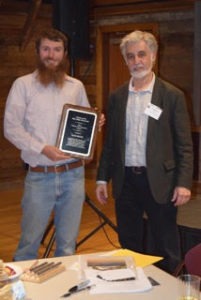 2016: Sam Kroiz, a mild mannered goat herder, entrepreneur with George’s Mill Dairy, and musician  became a fired-up activist for conservation when AT&T proposed constructing a monstrous building on top of the Short Hill. Sam stirred up opposition to their plan by setting up meetings with the staff  of the Loudoun County planning department, Lovettsville area citizens who were also outraged by this proposal, and by public appearances before the BOS. He even got Chair Randall to visit the goat farm so she could see for herself how visible and out of place the buildig would be, even miles away. She commented, having heard many opponents of the plan at these board meetings thank the Supervisors for their attention to the proposal,  just prior to the vote, that “indeed, the Board thanks the citizens of the County for their time and attention, and the fact that they showed how much they care about the county.”

2016: Jean Baderschneider and Kim Rapp learned of the plan to open a large beer drinking and entertainment venue in the middle of a residential neighborhood on an unpaved rural road in Bluemont.  It was seemingly a done-deal, as the brewery had the legal authority to locate there and the proper permits under current zoning.  Jean and Kim reached out to neighbors, and like-minded citizens and organizations.  Through their efforts, a team of people was assembled and moved into action.  Jean and Kim organized community meetings with lawmakers and encouraged contact with elected officials, while underwriting the legal costs of representation.  Jean and Kim continue their commitment to preserving what makes Western Loudoun special by advocating for noise abatement measures and changes to the Comprehensive Plan, which will influence the area’s future.

Letter to Board of Supervisors Opposing AT&T Cell Tower

The post Letter to Board of Supervisors Opposing AT&T Cell[...]

Join us for the joint conference of Virginia’s United Land[...]

Happy Earth Day! Today the pastures of Swoope are a[...]